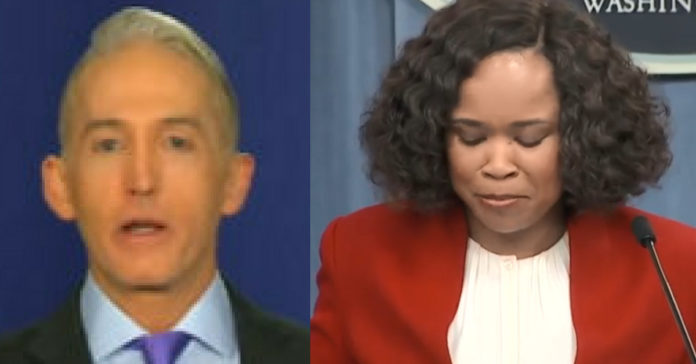 The reason Trey Gowdy is so respected by both sides of the aisle in Washington D.C. is that he seeks truth wherever it may take him.

Trey doesn’t play partisan politics. he simply demands that rules and laws are followed and when they are not he seeks to discover the truth.

And it looks like he is cleaning up a mess left by another arrogant bureaucrat.

As reported by The Washington Examiner: Congress is getting involved in investigating allegations that the Pentagon’s chief spokeswoman misused and retaliated against staff.

House Oversight Chairman Trey Gowdy, R-S.C., has ordered the Department of Defense to produce records related to the allegations against Dana White, according to a CNN report.

Gowdy wrote to Defense Secretary Jim Mattis on Tuesday to request “all documents and communications to, from, or about Dana White regarding her tasking other Department employees with non-official business,” and “all documents and communications to or from Dana White regarding the transfer of staff to different positions” by Sept. 7, and to arrange a briefing for the committee by the end of the month.

White, a Trump administration appointee and the department’s top public affairs official, is under investigation by the Pentagon inspector general for asking staff members to get her snacks and pantyhose from the Pentagon pharmacy, pick up her lunch, drive her to work, and do her mortgage paperwork, according to previous reports. Staffers who reported the behavior complained to the inspector general they were later transferred as a reprisal, according to CNN. The investigation is ongoing.

The letter notes that the allegations raise “questions about whether the Department’s senior managers receive proper ethics training,” and requests documents and training materials for senior officials related to ethics and management responsibilities.”

When asked by CNN Thursday about the letter, DoD spokesperson Col. Rob Manning said, “This is an ongoing review and therefore we are unable to provide additional comments.”