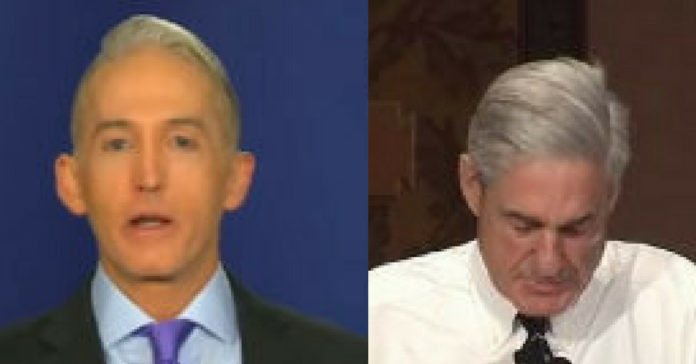 Trey Gowdy is a fighter for truth and justice and has been his entire life. That is why he is such a well-respected member of Congress.

By both sides of the aisle, it should be noted. In short, people listen when he speaks and what he just said on live TV spells doom for Bob Mueller.

Gowdy blew the whistle on the whole darn thing. Look, what Gowdy is saying is that this thing was rotten from the start.

Bruce Ohr and Chris Steele were working hand in hand to make this whole thing possible and that alone, coming from an Obama administration official and a guy Steele who worked for Clinton on the dossier and who worked the other side when he worked for a Russian oligarch (Oleg Deripaska) the whole thing stinks.

And Gowdy reached his limit and told Fox News last night that,

“We have run out of patience… They either need to set this for a date certain or there will be a subpoena issued.”

The emails raise a clear question of whether Steele was working, directly or indirectly, with Oleg Deripaska at the same time Steele was compiling the dossier — and whether the Justice Department, along with Simpson and Fusion GPS, was part of the project. Given Deripaska’s place in the Russian power structure, what that means in the big picture is unclear.

On Feb . 9 of this year, Senate Judiciary Committee chairman Charles Grassley wrote a letter to Hauser, the London lawyer, and asked, “Is it the case that Mr. Steele, through you, works or has worked on behalf of Mr. Deripaska or businesses associated with him?”

Hauser refused to answer, claiming such information was privileged. But he added: “I can confirm that neither my firm nor I was involved in the commissioning of, preparation of or payment for the so-called ‘Steele Dossier.’ I am not aware of any involvement by Mr. Deripaska in commissioning, preparing or paying for that document.”

“Is it fair to call him a Putin-linked Russian oligarch?” asked Cotton.

“Well, I’ll leave that characterization to others, and certainly not in this setting,” Wray said.

“That’s not something I can answer,” Wray said.

“Could we discuss it in a classified setting?”

“There might be more we could say there,” Wray answered.

The newly-released Ohr-Steele-Simpson emails are just one part of the dossier story. But if nothing else, they show that there is still much for the public to learn about the complex and far-reaching effort behind it.