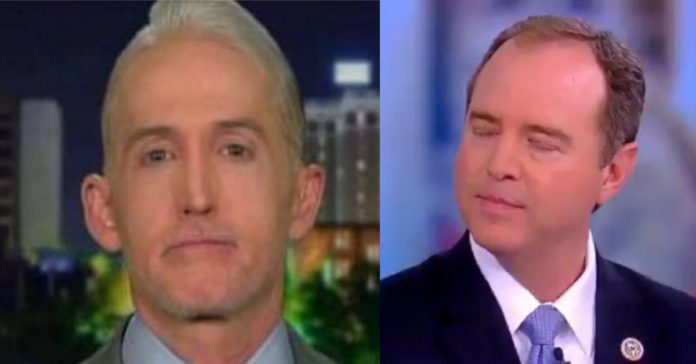 Trey Gowdy does not suffer liberal fools like Adam Schiff easily. In fact, he doesn’t suffer them at all, instead, he delights in embarrassing them and exposing them for all the world to see.

Just like he did last night on Fox News:

“Let me tell you this about Adam,” the South Carolina Republican said.

“Adam’s had a terrible last couple of years, he wanted to be the attorney general under Hillary Clinton and no one in the country worked harder to protect her than Adam Schiff.”

“If you ever have, I dunno, a couple of free months with nothing else to do,” Gowdy told Fox News’ Jason Chaffetz, a former congressman, “I want you to go back, Jason, and think of all the things you would not know if you had taken Adam Schiff’s advice.”

Gowdy then went on to list all of the issues that Schiff wanted kept under wraps to protect Clinton.

“You wouldn’t know the whole spontaneous reaction to a video was a hoax in Libya,” Gowdy said. “You would have never have read the first (Ambassador) Chris Stevens email.”

“You wouldn’t know that Hillary Clinton had this unique email arrangement with herself because Adam Schiff did everything in his power to keep you from finding out,” he continued.

“So look, if they secede from the Union and President Maxine Waters wants to make him the attorney general in California, more power to him,” Gowdy said, referencing Calexit.

“Otherwise, I don’t think anybody on my side of the aisle gives much of a damn of what Adam Schiff thinks.”

That is about as good as it gets.