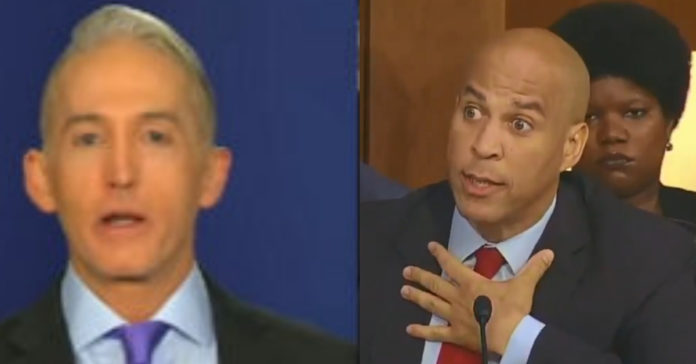 Trey Gowdy will be sorely missed in the swamp when he leaves for good at the end of his term.

He speaks the truth and is well respected on both sides of the aisle – something we need more of in today’s partisan times.

Kavanaugh faced intense scrutiny by Democrats in another day of questioning before the Senate Judiciary Committee on Thursday, getting grilled by potential 2020 contenders like California Sen. Kamala Harris and Sen. Cory Booker of New Jersey.

Gowdy was especially disappointed in Booker’s antics who compared himself to “Spartacus” as he threatened to release confidential documents and challenged the Committee to penalize him.

But even after likening himself to Spartacus, Booker’s stunt was a big flop as committee Republicans posted the same documents and scores of others since the restrictions on releasing the emails were already waived.

“They missed a wonderful opportunity, the Senate did, to have a robust, interesting hearing about judicial philosophy and whether you’re a strict constructionist or you’re a minimalist,” Gowdy told Fox News host Martha MacCallum.

“What I watched over the last couple days was a lot of people who want to be the nominee in 2020, and it’s sad,” he added, noting that Americans are probably tired of “four-year-long presidential election cycles.”

Naturally the revelation that Booker’s performance was just for effect as the documents were not an issue did not grab the same media attention, as liberals cheered on the self-titled gladiator for standing up to the GOP. But, Gowdy opined, it’s a “shame” to see what presidential politics can do to people.

“The shame of it all to me is that, that is what ambition and presidential politics can do to otherwise reasonable people” he said. “That was the shame of it to me.”