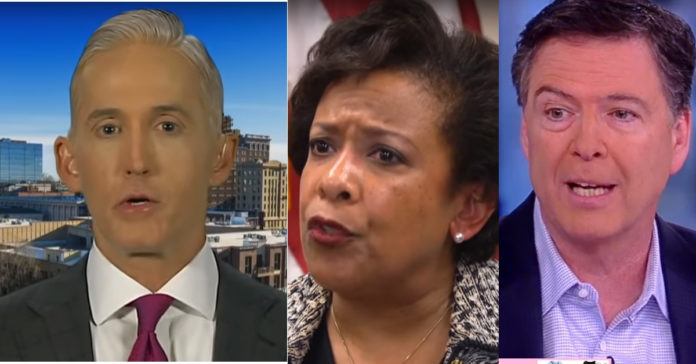 Trey Gowdy is making his move to clean up the mess the deep state left behind as Trump sent Obama’s lackeys packing.

There are many unanswered questions and Trey and the GOP need to get to the bottom of what in the hell was going on with our authorities during the election and even before.

As reported by Politico: House Republicans are preparing to call their highest-profile witnesses yet in a year-long investigation into the FBI and Justice Department’s actions in 2016 and 2017 — including former FBI Director James Comey, former Attorney General Loretta Lynch and Former Deputy Attorney General Sally Yates.

The large slate of requests suggests the panels leading the probe are entering the most crucial phase of their work and may still have weeks to go before interviews are complete. That leaves a narrow window for lawmakers to issue findings ahead of the 2018 congressional elections and could push their work into the lame-duck session of Congress. It likely ensures a revolving door of witness interviews during the sensitive final weeks of the campaign.

Democrats on the committees are livid over what they say was deception by the committee Republicans arranging the interviews, suggesting they weren’t informed about the requests until after they were made. In addition, the requests indicated that Democrats had been CC’ed, informing them of the interview requests. But in fact, Republicans had not informed them of the requests, they said, leaving a false impression with the invited witnesses that the minority party was aware.

“This is more than just a bad habit,” said Daniel Schwarz, spokesman for Rep. Jerry Nadler (D-N.Y.), the top Democrat on the Judiciary Committee. “The Republican Majority are representing to potential witnesses that we are party to these communications — but, time after time, that has just proved untrue.”

A House Judiciary Committee aide said Republicans have “continued to stay in contact with the Minority staff over the scheduling of interviews.