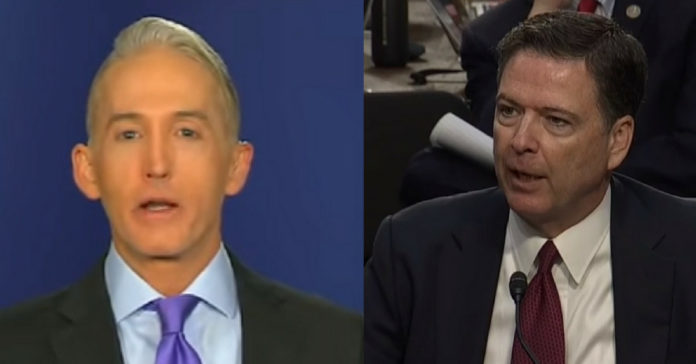 James Comey is the most hated man in America. The left hates him with a passion for what he did to Hillary’s campaign.

No doubts he sunk her chances but the left forgets she deserved it and probably worse.

She broke the law in many ways and she did not deserve a chance to run this great country.

The GOP hates Comey for what he did to start the witch hunt – clearly out of guilt for helping Hillary lose, he decided, as if he were God, to even the score.

It blew up in his face and Trey Gowdy just slammed the book on his legacy.   (VIDEO BELOW)

Gowdy launched into Tuesday’s session — a joint hearing held by the House oversight and judiciary panels — with a fiery condemnation of the former FBI director and certain agents in the bureau he led.

Referring to IG findings that Comey defied his superiors in his handling of the Clinton email case, Gowdy accused the ex-director of essentially operating by his own rules.

“We see Jim Comey and Jim Comey alone deciding which DOJ policies to follow and which to ignore,” he said.

Gowdy accused Comey of watering down his initial statement on the investigation’s findings and making other decisions on his own. While Comey has suggested he acted unilaterally out of concern for the Justice Department’s handling of the case, Gowdy questioned why he didn’t seek a special counsel — as he indirectly did regarding concerns about the Trump administration.

“Instead, he appointed himself FBI director, attorney general, special counsel, lead investigator and the general arbiter of what is good and right in the world according to him,” Gowdy said. (VIDEO BELOW)

Gowdy said that Horowitz’s report, which was released last Thursday, should “conjure anger, disappointment and sadness in anyone who reads it.”

He also said that, in the wake of the IG report, there were FBI agents and attorneys who decided to “prejudge” the outcome of the Clinton case.

“These exact same FBI agents and attorney prejudged the outcome of the Russia investigation before it even began,” he added.