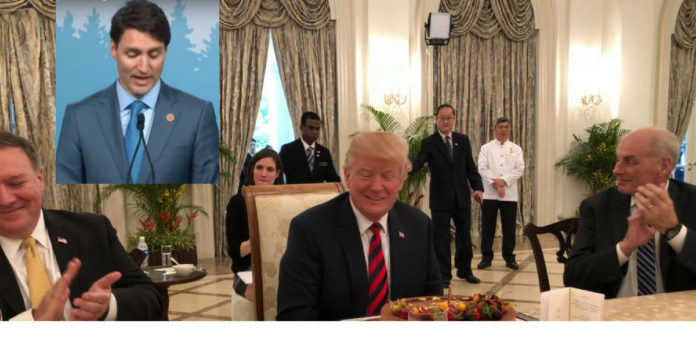 Justin Trudeau grabbed as much of the spotlight as he could at the G7 summit. Of course, to do so he had to go after President Trump.

Trump had other ideas and left the summit early to get to a historic meeting that makes the G7 summit look like child’s play.

In an acknowledgment of the history-making summit, the Singpore Prime Minister gave Trump the respect he deserves, unlike Trudeau, complete with a happy birthday surprise.

Singapore held a surprise birthday celebration with cake and ice cream for President Donald Trump on the eve of his landmark summit with North Korean leader Kim Jong Un.

Trump met with Singaporean Prime Minister Lee Hsien Loong on Monday. During their lunch, the latter had a special birthday cake brought out for the American president, who will turn 72 Thursday.

Singapore’s Minister of Foreign Affairs Vivian Balakrishnan tweeted out a picture of the festivities.

“We’ve got a very interesting meeting in particular tomorrow, and I just think it’s going to work out very nicely,” Trump said Monday.

President Trump Steps To Microphone, Silences All His Critics With What He Says Next (Video)