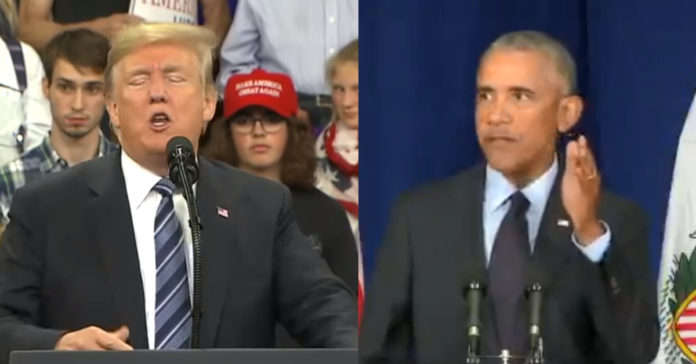 ObamaObamaThat didn’t take long. We knew Trump would hit back hard a Barack Obama for running his mouth today in Illinois, but we didn’t know he’d hit back this hard.

We also know Trump is funny he hit the right notes with his epic takedown of Barack.

As reported by Breitbart: President Donald Trump responded quickly to former President Barack Obama’s speech on Friday, claiming that he fell asleep during the speech.

The president responded to Obama’s critical speech of his presidency during a fundraising speech in Fargo, North Dakota.

Trump acknowledged that Obama was “trying to take credit” for the economic boom that the United States was experiencing after he got elected. He argued that the economy would have crashed if Hillary Clinton had won the election.

“If the Democrats got in with their agenda in November of almost two years ago, instead of having 4.2 up, I believe honestly we’d have 4.2 down,” Trump said. “We were heading South.”

He described Obama’s so-called “recovery” as the weakest economic recovery since the Great Depression.

Trump said that under his presidency the economy was experiencing a “rocket ship” of growth.

He cited the positive economic numbers for August that were just released as proof.

“It took me a few months to get the engine started,” Trump said, pointing out that he did it by cutting regulations on projects like the Dakota pipeline.

Trump read a list of his accomplishments, pointing to historically low unemployment rates, wage growth, and a rebirth in American manufacturing.

“Isn’t this much more exciting than listening to President Obama’s speech?” he asked, as the audience laughed and applauded.