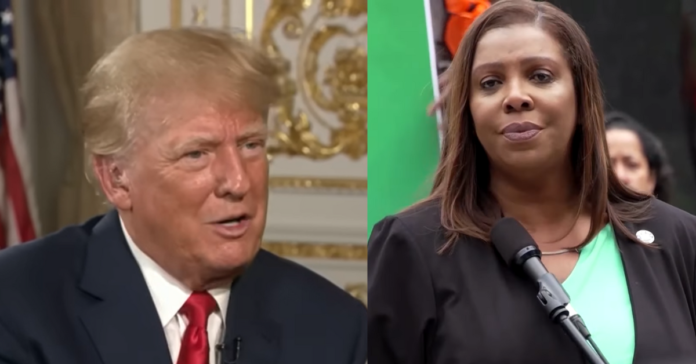 Former President Trump made a big move and filed a lawsuit in Florida to stop New York Attorney General Letitia James from accessing documents from his trust as Trump fights her civil fraud case seeking $250 million from the Trump family.

Trump attorneys wrote in their filing: “Using the Civil Action, James seeks unprecedented oversight of President Trump’s business and financial affairs – including control over President Trump’s revocable trust – as she grandstands in demanding $250 million in ‘restitution’ for the people of New York.

“In truth, James knows that no restitution is owed but seeks only attention for herself and retribution against President Trump.

“These are private matters to President Trump, and under Florida law, revelation of a settlor’s revocable trust while the settlor is still alive threatens the settlor’s right to privacy guaranteed by Article I, Section 23 of the Florida Constitution and the common law,” Trump’s lawsuit states.

Trump has filed a lawsuit against New York Attorney General Letitia James, accusing her of using “intimidation and harassment” and using her position in “attempts to steal, destroy or control things Trump.”https://t.co/NYXnPsQDuT

“Today, I filed a lawsuit in Florida State Circuit Court against the corrupt Attorney General of New York State, Letitia “Peekaboo” James. New York State is one of the most crime-ridden places on earth with murders, robberies, drug deals, and every other form of crime setting records on a weekly basis.

“While James does nothing to protect New York against these violent crimes and criminals, she attacks great and upstanding businesses which have done nothing wrong, like the very successful, job and tax producing Trump Organization that I have painstakingly built over a long period of years.

“James now thinks it is the business of the State of New York to go after my revocable trust and pry into my private estate plan, only to look for ways to recklessly injure me, my family, my businesses…

“If I were not elected President of the United States, and now leading in the polls by substantial margins against both Democrats and Republicans, this would not be happening.”

A spokeswoman for James said:

“Multiple judges have dismissed Donald Trump’s baseless attempts to evade justice, and no number of lawsuits will deter us from pursuing this fraud.

“We sued Donald Trump because he committed extensive financial fraud.

“That fact hasn’t changed, and neither will our resolve to ensure that no matter how powerful or political one might be, no one is above the law.”