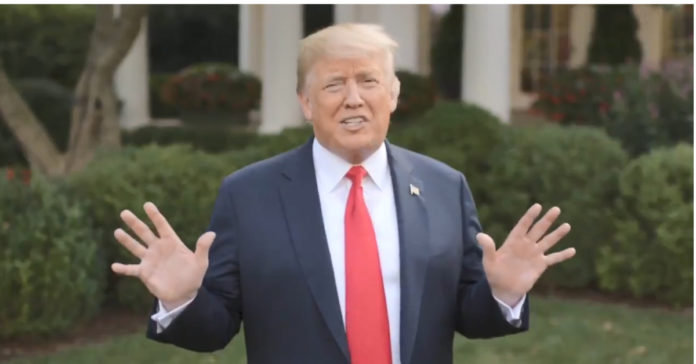 President Trump knows what is at stake in a few months when America goes to the polls. Literally, if the Dems win, everything he has done is at risk.

Now some media reports said he said his policies would be violently overturned while others say he said the opposition would be fierce and virulent.

Doesn’t really matter, the point is this election is for all the marbles and he wants his people to turn out.

As reported by The BBC: US President Donald Trump has warned that his policies will be “violently” overturned if the Democrats win November’s mid-term elections.

He told Evangelical leaders that the vote was a “referendum” on freedom of speech and religion, and that these were threatened by “violent people”.

He appealed to conservative Christian groups for help, saying they were one vote away from “losing everything”.

Mid-term elections are widely seen as a test of the president’s popularity.

Mr Trump has been battling negative publicity after his ex-lawyer and former campaign chief were convicted earlier this month.

An audio recording of Mr Trump’s closed-door meeting with Evangelical leaders at the White House was leaked to US media.

During the meeting, Mr Trump said the mid-term elections were not just a referendum on him but also “on your religion, it’s a referendum on free speech and the First Amendment [guaranteeing basic freedoms]”.

“It’s not a question of like or dislike, it’s a question that they will overturn everything that we’ve done and they will do it quickly and violently. And violently. There is violence. When you look at Antifa – these are violent people,” he said.

Antifa – short for anti-fascist – refers to groups of far-left protesters who fight far-right ideology and regularly clash with far-right demonstrators.

Nobody walked out of there thinking that the Democrats were going to shoot us all,” Jerry Falwell Jr said.

.@ralphreed said Trump didn’t warn of violence in his estimation: “He said if the Democrats take the House there will be virulent opposition to his agenda. He said some of those groups on the left incite and advocate violence and mentioned Antifa.”