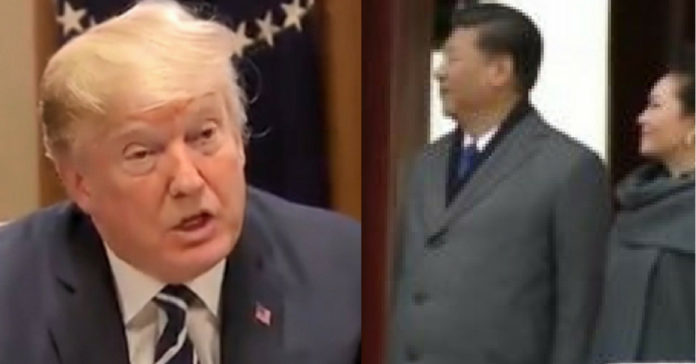 Look, China snookered the entire world and especially the Clinton’s, the Obama’s and the Bush’s.

That is a fact. Those three geniuses watched as China stole our middle class and watched as the greedy CEO’s got richer than their wildest dreams in the process.

And it all started with allowing China to enter into the WTO. Without the WTO, the house of cards that is the Chinese economy falls apart.

Pulling China out of the WTO or at least threatening to so they will change their ways is a long time coming. And the right move.

Look, we need to confront China right now before it is too late.

As reported by The Washington Examiner:

The chairman of the White House Council of Economic Advisers suggested Monday that the U.S. and other members of the World Trade Organization may have to kick China out of the world trade body if it doesn’t start playing by the rules.

Kevin Hassett said China for too long has flouted intellectual property rights rules, and said it could find itself outside the WTO if it doesn’t start respecting those rules.

“China really needs to make up its mind,” Hassett said on Fox Business News. “Do they want to be in the community of nations, do they want to be part of the WTO and just behave like everybody else, or don’t they?”

“And if they don’t, then we, the community of nations, are going to have to think about what are we going to do about that?” he asked. “Are we going to let them stay in the WTO?”

Hassett spoke as the trade war between the U.S. and China continues to heat up. Last week, both countries imposed tariffs on $16 billion of their respective imports.

The Trump administration has threatened tariffs on another $200 billion worth of Chinese goods if China fails to respect IPR rules and stops forced technology transfer.

“Economically, China needs to enter the community of nations,” he said. “They need to start acting like the other developed nations.”

“If I, you know, invented this new gizmo, then you’d be shocked if the German government stole it from me and then, you know, seeded a German startup company with my stolen idea,” Hassett added. “The Chinese government’s doing that kind of thing all the time, and yet they’re in the WTO.”

.@WhiteHouseCEA's Kevin Hassett on China: "They need to start acting like the other developed nations." pic.twitter.com/V5DEyP1WSq