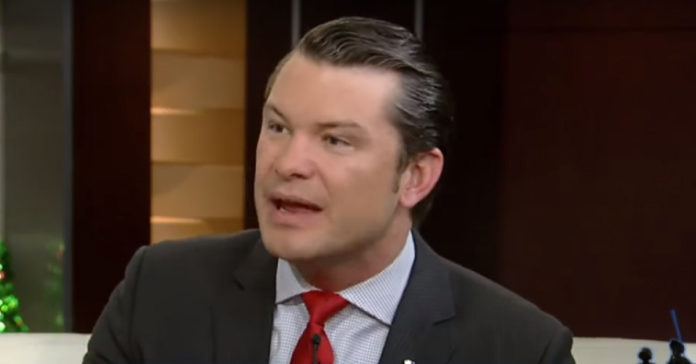 President Trump is a huge fan of Fox and Friends, the long-running and ratings winning morning show.

Pete Hegseth, one of the co-hosts, is one of Trump’s favorites and they often talk via telephone.

Trump was even considering Pete, he is a veteran, for the top job at the VA.

A man who was struck by an ax thrown by “Fox & Friends” co-host Pete Hegseth on the show’s set in 2015 is suing the host and the network over injuries he allegedly sustained in the incident.

Jeff Prosperie, who was struck by the ax thrown by Hegseth during a segment on the show, alleges that the co-host “negligently attempted to throw an axe at a ‘target’” and that the target was “negligently placed in an area” that put individuals “in the path of peril.”  (VIDEO BELOW)

Hegseth tossed the ax as part of a segment on “Fox & Friends” in 2015, but video shows he missed the target. Video later posted by Prosperie shows the axe striking him.

The video of the incident quickly went viral and was widely covered at the time.

Fox News told The Hill in an emailed statement that the lawsuit was “surprising,” given that Prosperie declined the network’s offer for medical assistance and compensation at the time of the incident and that Fox representatives had not heard from Prosperie since 2015.(VIDEO BELOW)

“The incident involving Jeff Prosperie from 2015 was unfortunate and completely unintentional. FOX News immediately apologized to Prosperie and offered medical assistance, which he declined saying he was ‘okay.'” Fox wrote.

“The network also offered compensation, which he declined as well. We have not heard from Prosperie since 2015, so the lawsuit is surprising and we are reviewing it.”

The lawsuit, filed in the New York Supreme Court on Tuesday, alleges that the defendants in the case, which include Hegseth, Fox News and “Fox & Friends,” were “negligent, wanton, reckless and careless” in setting up the ax-tossing event and that it put pedestrians and others in danger.

This is why people hate lawyers…

If you watch until the end Pete actually interviews the “victim” and he seems just fine.