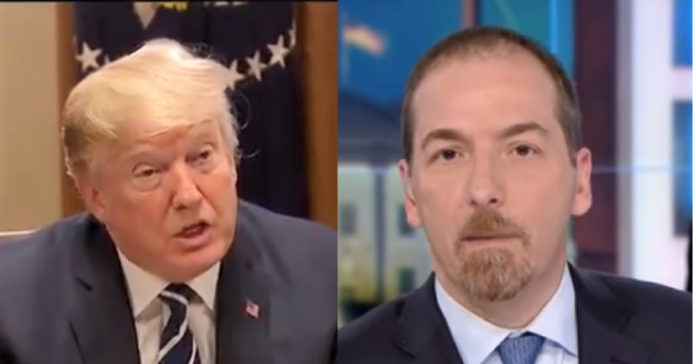 The hysterical media surely earned their nickname with their performance over the last 24 hours.

They went after Trump for comments he made during a historic meeting with Putin and once they smelled blood they went into a feeding frenzy the likes we have never seen.

What they missed is that Trump has always said that Russia hacked the election and that they didn’t touch one vote.

But every time he said it the left went nuts and said he was illegitimate.  So only a fool would keep feeding fuel to the opposition’s fire.

And Trump is no fool. So he dropkicked the hysterical media today with a simple truth and one hopes they give Trump the benefit of doubt they did Clinton, Bush, and Obama.

President Trump said Tuesday that he misspoke when he seemed to dismiss allegations of Russian meddling in the 2016 elections, stating clearly that he accepts the U.S. intelligence community’s conclusions as he sought to quell a bipartisan firestorm over his press conference with Vladimir Putin.

The president clarified his remarks during a meeting with lawmakers at the White House, in a rare backtrack.

In Helsinki a day earlier, Trump had said he doesn’t “see any reason why” Russia would be behind election meddling. This and other comments led to bipartisan outrage and accusations that he was taking Putin’s word over the intelligence community’s.

But Trump said Tuesday he meant the opposite. He suggested he was surprised by the negative reaction when he returned to Washington.

“I came back and said ‘What is going on, what’s the big deal?’” Trump said, adding that he reviewed the transcript and “realized that there is a need for some clarification.”

The president told reporters that he meant to say he doesn’t see why Russia “wouldn’t” be responsible.

“I said the word ‘would’ instead of ‘wouldn’t’ … sort of a double negative,” he said.

Trump: "I have full faith and support for America's great intelligence agencies. Let me be totally clear in saying…I accept our intelligence community's conclusion that Russia's meddling in the 2016 election took place. Could be other people, also." pic.twitter.com/rIgI1cqqEx