A Donald Trump and a Kim Jong Un impersonator arrived at the Winter Olympics in PyeongChang to call for peace.

Kim Jong Un was played by an Australian musician named Howard, who is a dead ringer for the North Korean dictator. The part of President Trump was played by American musician Dennis Alan, aged 67.

According to the New York Post, the two impostors were booted from the Olympic stadium after being mauled by fans trying to take selfies with them. (VIDEO BELOW)

However, that did not stop the fun. A Reuters video shows the two out in the streets of South Korea, discussing peace, and having a blast with the fans.

The impersonators told Reuters “So let’s start talking and stop with all the missiles and everything else,” the impersonator said. “We want peace, everybody wants peace, nobody wants war.” 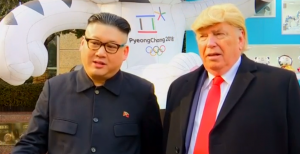 Trump and Kim impersonators at the opening ceremonies pic.twitter.com/tsoqwOExLU

**We want PEACE, and this is FUNNY!  Please SHARE!