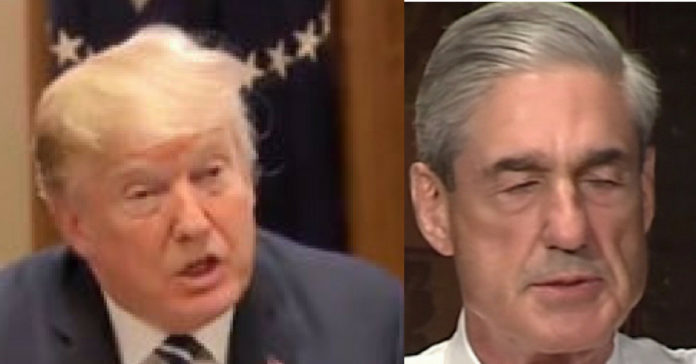 There is a breaking story that is sending shockwaves through Washington DC. This is a stunning new development in the Meuller investigation that spells doom for Bob.

Trump’s lawyer, White House counsel Donald McGahn, has been cooperating with Mueller and giving Bob unprecedented and an absolutely historic amount of access.

30 hours this guy sat with Mueller, was totally honest, a guy who was in the room for everything, and Mueller has nothing?

It seems this investigation is in trouble and sinking like stone…as Trump made abundantly clear with his tweet heard round the world.

Look, if Trump was guilty there is no way he would have allowed all this access – Trump knows the courts better than most lawyers.

White House counsel Donald McGahn has been cooperating with special counsel Robert Mueller in his probe into possible collusion between the Trump campaign and Russia, according to an explosive New York Times report published Saturday.

McGahn has reportedly discussed accounts of multiple episodes at the center of Mueller’s probe into whether President Trump obstructed justice. Sources told the Times that McGahn has had three voluntary interviews with Mueller’s team totaling 30 hours.

Among the episodes McGahn reportedly discussed with investigators is Trump’s firing last year of former FBI Director James Comey and the president’s repeated urging of Attorney General Jeff Sessions to claim oversight of the special counsel despite his recusal from Russia probes.

McGahn began cooperating with Mueller’s team last year after Trump’s first round of personal lawyers decided to give investigators as much information as possible, believing the president had nothing to hide, the newspaper noted.

However, the Times reports that McGahn became concerned over his growing exposure in the investigation and began to suspect the president was setting him up to take the fall for any alleged obstruction of justice.

McGahn and his own lawyer, William Burck, then decided for the White House counsel to do as much on his own to cooperate with Mueller, the newspaper reported.

Trump responded to the story Saturday, tweeting, “I allowed White House Counsel Don McGahn, and all other requested members of the White House Staff, to fully cooperate with the Special Counsel. In addition we readily gave over one million pages of documents. Most transparent in history. No Collusion, No Obstruction. Witch Hunt!”

The Times reports that Trump’s personal lawyers could have exercised attorney-client privilege to know what McGahn planned to tell investigators, but the president’s lawyers did not go through that process.

McGahn told investigators that the president attempted to control the investigation and gave a mixture of potentially damaging and favorable information concerning Trump, the newspaper reported. But the White House counsel told Mueller’s team he never saw Trump overstep his legal authorities.

“The president and Don have a great relationship. He appreciates all the hard work he’s done, particularly his help and expertise with the judges, and the Supreme Court,” White House press secretary Sarah Huckabee Sanders told Times.

I allowed White House Counsel Don McGahn, and all other requested members of the White House Staff, to fully cooperate with the Special Counsel. In addition we readily gave over one million pages of documents. Most transparent in history. No Collusion, No Obstruction. Witch Hunt!