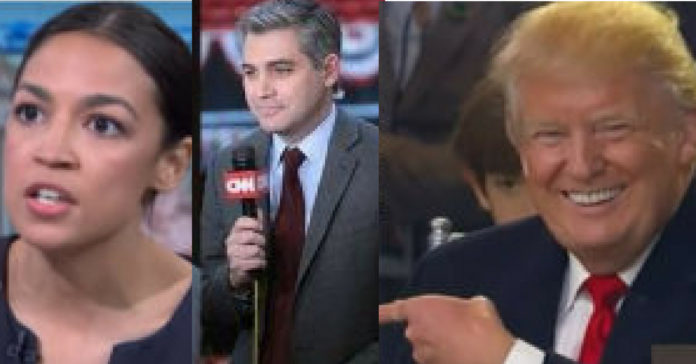 The left is a bunch of hypocrites easily exposed. They do it themselves – you don’t even have to do it to them.

It’s like the gang who couldn’t shoot straight. Their inability to function effectively is the single biggest reason the blue wave is a myth.

Or if it does come there will be no one who knows how to ride it to victory that is for sure. Not with these keystone cops running around as Democrats.

The Queens Chronicle, a local news outlet, reported that the campaign for the 28-year-old progressive prevented reporters from attending a campaign event in Corona on Sunday, even though it was open to the rest of the public. The campaign reportedly barred reporters from a prior event as well.

Ocasio-Cortez returned to her district after stumping for like-minded candidates across the country, even joining up with Vermont Sen. Bernie Sanders. She became an overnight political sensation and a sought-after endorsement on the left upon defeating longtime Rep. Joe Crowley in New York’s Democratic primary in June.

Her campaign did not immediately return a request for comment about the ban from Fox News. But a spokesman told the Queens Chronicle all the national attention contributed to the decision to prevent reporters from covering the event.

“We wanted to help create a space where community members felt comfortable and open to express themselves without the distraction of cameras and press. These were the first set of events where the press has been excluded,” campaign spokesman Corbin Trent said. “This is an outlier and will not be the norm. We’re still adjusting our logistics to fit Alexandria’s national profile.”

The explanation, though, did not satisfy reporters.

Seung Min Kim, a Washington Post reporter, tweeted that Ocasio-Cortez “is in for a rough time on Capitol Hill — where reporters roam freely at all hours of the day and night — if this is her attitude toward the press.”