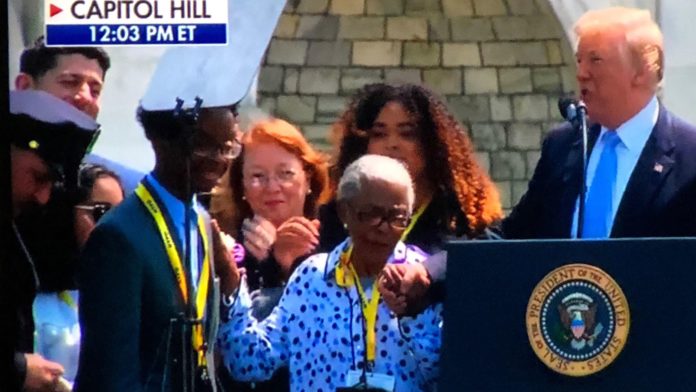 You could tell just how much it meant to the family, especially the officers 90-year-old grandmother who held President Trump’s hand and patted him on the arm while he was speaking. (VIDEO BELOW)

President Trump also asked the officer’s partner to say a few words about her. It almost looked like the president was going to cry, he was so caught up in the moment.

Officer Familia was the youngest of nine children and the mother of three.

She used that strength to raise her three children — a boy and girl who are twins, and a daughter who is in college, Mr. Cuello said — as well to care for her mother, who lived with her and the twins in their apartment in Kingsbridge Heights, about two miles north of where she was killed.

Officer Familia became a police officer at age 36 after holding a number of different jobs. It was instantly a good fit, her nephew said.

“She was a warrior, tell you the truth,” Mr. Cuello said. “She was a fighter, she was tough — and that was the job for her.”

Milton Castro, 47, a professional photographer, grew up in Washington Heights with Officer Familia, where she stood out among the other teenagers, he said: She was louder, funnier, bolder. “If we were in a circle in front of the junior high school, or in front of a building, she would be in the middle of everyone, making jokes, telling a story,” he said.

WATCH this short video. You can tell how much he loves and respects our law enforcement officers.  The CLM (Crooked Liberal Media) will probably demonize him for this speech.  Please tell us what YOU think, after you watch.

This is simply awesome!  Here’s one more: