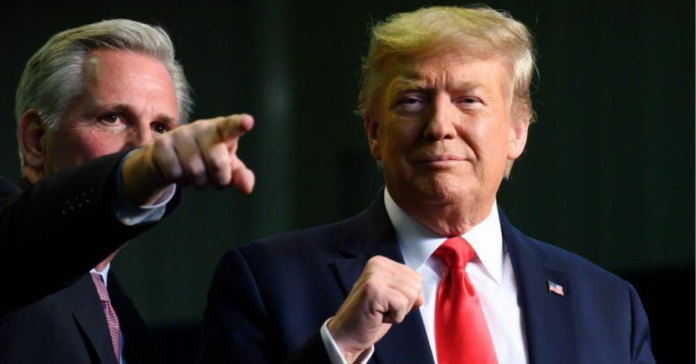 Former President Trump just made a big move and accepted the invitation from the North Carolina GOP to headline the state Republican Party’s annual convention dinner. The convention will take place in early June.

“President Trump delivered real results for North Carolina by rebuilding the military, standing strong against China, and unleashing the American Economy,” he added.

“We are honored to welcome President Trump to our convention as the Republican Party launches our campaign to retake Congress and the Senate in the 2022 midterms,” he said.

Kristi Noem will be the other guest speaker. The North Carolina GOP issued a press release saying:

Trump defeated more than a dozen seasoned rivals to win the Republican nomination and went on to win the election over former Secretary of State Hillary Clinton. His campaign slogan was “Make America Great Again,” and he moved swiftly to reinvigorate “Buy American and Hire American” policies.

He signed a major tax reform bill into law and directed the reduction of federal regulations intended to secure a long-running economic expansion and a historically low unemployment rate. His trade policies encouraged tariffs on foreign aluminum and steel and a series of renegotiations of trade agreements with Mexico, Canada, China, Japan, and South Korea.

Trump’s commitment to “America first” abroad shaped not only his trade and tariff policies but his approach to immigration and overseas commitments.

At his urging, North Atlantic Treaty Organization (NATO) member states increased their contributions to the alliance. Trump recognized Israeli sovereignty over the Golan Heights, and moved the American Embassy from Tel Aviv to Jerusalem, recognizing the ancient city as Israel’s capital.

His approach to the problem of nuclear proliferation included applying maximum economic pressure on both North Korea and Iran.

Trump increased the budget for the U.S. military, and during his administration, the self-proclaimed Islamic State (ISIS), which had taken territory in Iraq and Syria and was responsible for inciting terrorist attacks, was defeated.