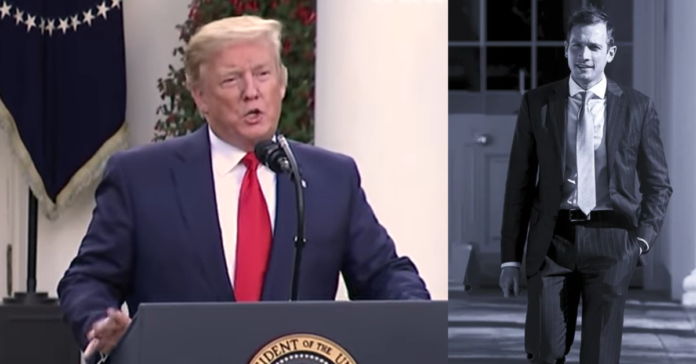 Former President Trump just made his first big endorsement of the fast-approaching 2022 election season and it is no surprise it is against a GOP Rep who voted to impeach him.

Trump’s statement reads: “Max Miller is a wonderful person who did a great job at the White House and will be a fantastic Congressman. He is a Marine veteran, a son of Ohio, and a true patriot.”

“Current Rep. Anthony Gonzalez should not be representing the people of the 16th district because he does not represent their interest or their heart. Max Miller has my Complete and Total Endorsement.”

Max said in his announcement: “I’m running for Congress to stand up for Northeast Ohioans.   They overwhelmingly voted for the America First agenda. But their Congressman betrayed them when he voted to impeach President Trump. I won’t back down. And I’ll never betray them.”

Gonzalez, a former football player for Ohio State and the Indianapolis Colts, was first elected to Congress in 2018. Gonzalez voted with Trump 86% of his time in office, according to Five Thirty Eight, including opposing the revocation of the president’s declaration of an emergency to construct his border wall. However, Gonzalez broke with Trump over his claims of election fraud, voting to certify the entire 2020 electoral slate. He was one of ten House Republicans who voted to impeach the president for his actions during the Jan. 6 Capitol riot.

“I believe that this is the right vote, and I believe it sends the right message to all future presidents and anybody who considers taking the Oval Office,” Gonzalez told NBC News of his decision to impeach.

Miller, who served as a senior advisor to Trump, currently sits on the United State Holocaust Memorial Council Board of Trustees. He criticized Gonzalez’s impeachment vote, tweeting that Gonzalez “betrayed [Ohioans] when he voted to impeach President Trump.”