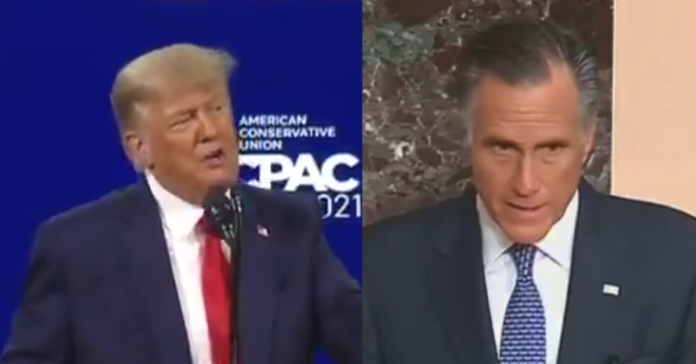 Former President Donald Trump went after the ‘grandstanders’ in the GOP who voted against him on impeachment during his speech yesterday at CPAC.

Trump named names and told the crowd to vote them out when they have the chance. “Instead of attacking me and more importantly the voters of our movement, top establishment Republicans in Washington should be spending their energy in opposing Biden, Pelosi, Schumer and the Democrats.”

“And the warmonger, the person who loves seeing our troops fighting, Liz Cheney. Her poll numbers have dropped faster than any human being I’ve ever seen,” he said.

“Hopefully they’ll get rid of her with the next election. Get rid of ’em all,” she said.

Trump also went after Joe Biden saying he had had “the most disastrous first month of any president in modern history.”

“We all knew that the Biden administration was going to be bad, but none of us could ever imagine how bad and how far left he could be.”

The good news is, in her state, she’s been censured. And in her state her poll numbers have dropped faster than any human being I’ve ever seen.

So hopefully they’ll get rid of her with the next election. Get rid of them all.”

In his first major public address since the end of his presidency, Donald Trump used the keynote speech at the Conservative Political Action Conference (CPAC) to exact revenge on the 17 Republican lawmakers who voted to impeach or convict him for the Capitol riots.

Calling seven senators and 10 House members “grandstanders”, Mr Trump name-checked each of them starting with Mitt Romney, Ben Sasse, Richard Burr, Bill Cassidy, Susan Collins, Lisa Murkowski, Pat Tomney. He concluded the list with congresswoman Liz Cheney whom he described as a “warmonger” and a “person that loves seeing our troops fighting”, asking GOP supporters to “get rid” of them.

The crowd erupted in boos and jeering at the mention of Ms Cheney, the third highest-ranking House Republican who voted to impeach Mr Trump following the capitol riots.