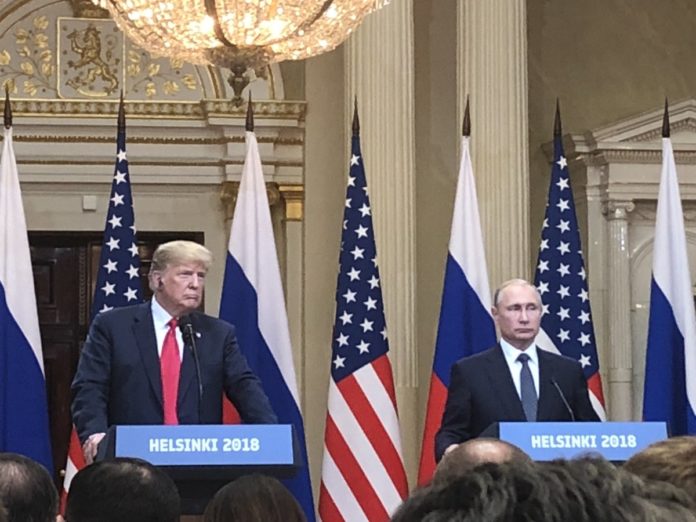 The media is literally besides themselves with the stunning meeting between President Trump and Vlad Putin.

Andreson Cooper said right after the press conference between the two world leaders,

“You have been watching perhaps one of the most disgraceful performances by an American president at a summit in front of a Russian leader certainly that I’ve ever seen. An extraordinary press conference.”

Tell us what you really think, Anderson.

“Donald Trump’s press conference performance in Helsinki rises to & exceeds the threshold of “high crimes & misdemeanors.” It was nothing short of treasonous. Not only were Trump’s comments imbecilic, he is wholly in the pocket of Putin. Republican Patriots: Where are you???”

I am not sure how they all jump to that conclusion based off a short press conference?

Trump did say this according to the Daily Mail:

Agreeing on the need for increased cooperation Trump said: ‘If we are going to solve many of the problems facing our world, we will have to find ways to cooperate.’

He said he had discussed a wide range of critical issues for both countries, including the war in Syria, Iran, global terrorism and nuclear arms control. He also addressed the issue of alleged Russian interference in U.S. elections, he said.

‘We made the first steps towards a brighter future, grounded on cooperation and peace,’ he said. ‘Refusing to engage will not accomplish anything.’

And he made a promise to destroy forever the scourge that is radical Islam.

President Trump says he and President Putin will work together to destroy radical Islamic terrorism pic.twitter.com/AuIL9eqRSb

What is wrong with that? We have a common enemy – Russia also deals with radical Islamic terrorists – so why not fight them together?

Maybe the media and the left need to go refresh their cliches because there is a reason everyone knows these words of wisdom – because they are true.

Trump described Russia as a “competitor” with the United States, adding that he considered that a “compliment.” He blamed “both sides” for the complicating the relationship between the two countries and promised to work for closer relations.

“Our relationship has never been worse than it is now,” he said. “However, that changed as of about four hours ago. I really believe that.”