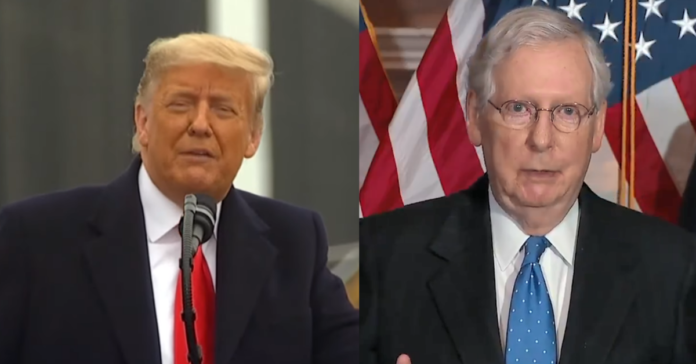 Former President Donald Trump is planning to launch a “revenge tour” to recruit and vet candidates to take on establishment GOP politicians in the House and Senate. Trump is slated to make his first public appearance at CPAC at the end of this month signaling his self-imposed period of silence is coming to an end.

He has strongly indicated he will run again and to possibly set the stage for that move he will vet candidates to mount primary challenges to establishment Republican candidates and will fundraise and offer support for them in other ways.

Trump is also getting some pushback from within to try to keep the GOP unified but with his snub of Nikki Haley last week and his anger at Mitch McConnell that is highly unlikely.

“We are in the process of putting together a more formal schedule for candidates who want to come get his endorsement,” said senior Trump adviser Jason Miller.

The planning for Trump’s coming revenge tour comes as other top Republicans try to cajole him into working with the party’s apparatus ahead of next year’s midterm elections, rather than recruiting rival candidates whose bids could complicate primaries and cost the GOP critical seats. Sen. Lindsey Graham (R-S.C.) is expected to meet with Trump over the weekend to discuss his upcoming plans, including the former president’s desire to push for voter reforms at a time when the topic of election integrity has created a major split among elected Republicans.

Others in Trump’s orbit have encouraged him to wait and see if Republicans who’ve crossed him and are up for reelection next fall, such as Govs. Mike DeWine of Ohio and Brian Kemp of Georgia, attempt a peace offering before he launches a serious search for possible primary challengers.

“I’m more worried about 2022 than I’ve ever been. I don’t want to eat our own,” Graham told Fox News on the heels of a blistering statement Trump released this week accusing Senate Minority Leader Mitch McConnell (R-Ky.) of jeopardizing GOP candidates with his “lack of political insight, wisdom, skill, and personality.”

In the statement, Trump vowed to recruit insurgent candidates “who espouse Making America Great Again and our policy of America first” wherever he feels such challenges are necessary. The former president has already set his sights on ousting Reps. Liz Cheney of Wyoming, the No. 3 House Republican, and Fred Upton of Michigan, if he forgoes retirement. Both Cheney and Upton voted to impeach Trump following the Jan. 6 riot at the U.S. Capitol. Rep. Peter Meijer, a second Michigan congressman who voted for impeachment, already faces a primary challenger from an Afghanistan veteran and self-declared Trump supporter.

The former president is reportedly only taking meetings with those who share his desire for revenge. https://t.co/BabJVACWbN