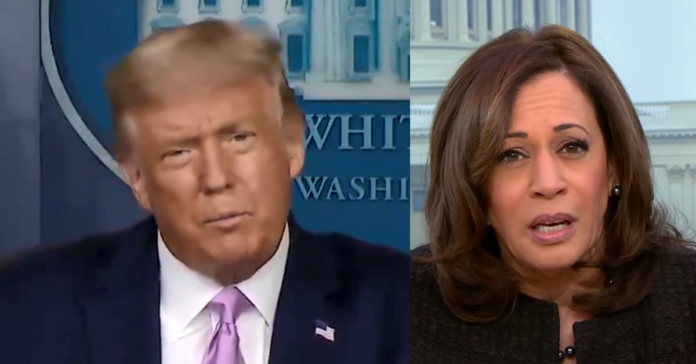 Kamala Harris and Democrats across the country are nervously watching Kamala’s numbers sink with each passing day. If Biden wanted to make sure Kamala couldn’t try to challenge him in 2024, giving her the impossible jobs, like border czar, would do it. We don’t know why team Biden seems to want to sabotage Harris, but they are doing a great job of it if it is an accident.

That said, most don’t expect Biden to be on the ballot in 2024 and think Kamala will be. In the very likely scenario, where Kamala is the nominee and faces Trump in 2024, the Dems should be terrified.

Because a new survey from McLaughlin shows that Trump would crush Kamala in a head-to-head matchup. With 48% of the country viewing Kamala unfavorably, she is almost too toxic to win right now, imagine what will happen in the next few years.

Kamala can take some solace in the fact that there are other Dem politicians who are even less popular than she is, namely Speaker of the House Nancy Pelosi who clocked in with a 37% favorable and 57% unfavorable.

And Senate Majority Leader Chuck Schumer, D-N.Y., who saw his numbers plummet to only 32% favorable to 48% unfavorable.

Even among Biden voters (51%) and Democrats (50%), many said it’s likely Harris will be president.

In a presidential contest pitting Trump against Harris, the former president leads 49% to 45%.

Although Biden maintains a net positive job approval — McLaughlin said the president’s favorable to unfavorable ratings are close to 53% approve  to 46% disapprove — it’s down from last month when it was 56% – 43%.

The news for Harris is worse. She’s favorable with less than half (47%) of all voters, while 48% are unfavorable to her.

Harris still leads among Democrats in a potential 2024 primary field. She received 35% of the vote, which was more than former first lady Michelle Obama (16%), Rep. Alexandria Ocasio-Cortez, D-N.Y., (7%), and Secretary of Transportation Pete Buttigieg (6 %).

Despite much negative coverage about Trump in the mainstream media, 73%, of all Republican primary voters, which includes independents who vote in GOP primaries, want to see the former president run again in 2024.

One desperate measure to change election laws, in places such as California and Vermont that allow non-citizens to vote in US elections, is very unpopular with only 30% approval and 61% disapproval.

Making matter worse for the Biden Democrats, the economy is cooling off in public opinion. Last month the majority of voters said the economy was getting better 52%-39%. This month better has fallen to better 49% and 43% say worse.

The majority of voters, 50%, say we’re in a recession. Only 42% say we are not in recession. The direction of the country has stalled at 49% right direction to 46% wrong track.

As the virus recedes as a top issue to 16%, reopening the economy and other economic concerns rise to 27% and fixing immigration has risen to 12%.