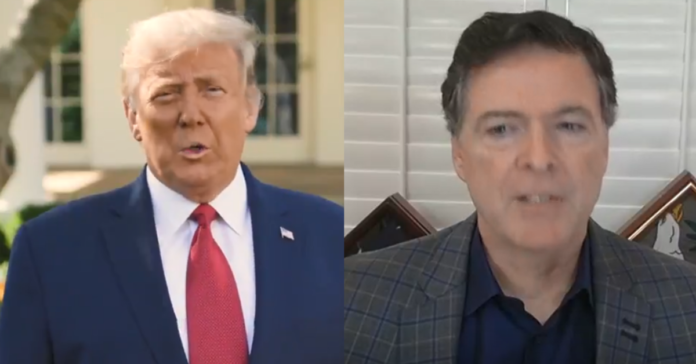 President Trump put showboat James Comey on notice today saying he was in favor of having a special prosecutor look into Comey and the gang who couldn’t spy straight.

Maria Bartiromo said: “Before we leave the subject of Durham, I feel like something happened in September. I don’t know what happened, but we were all expecting Durham to come out and A.G. Barr to be aggressive,”

Carter Page, a former Trump campaign associate, filed a lawsuit against Comey, McCabe, the FBI, the Justice Department, and others on Friday seeking $75 million in damages related to the “unjustified and illegal actions” and “unlawful spying” against him.

Horowitz criticized the bureau for at least 17 “significant errors and omissions” and for its reliance upon a discredited and Democratic-funded dossier compiled by British ex-spy Christopher Steele.

Declassified footnotes showed the FBI was aware that Steele’s dossier might have been compromised by Russian disinformation.

Durham is investigating the origins and conduct of the Trump-Russia investigation, and his inquiry has led to one guilty plea, with Kevin Clinesmith admitting he fraudulently changed the wording of a CIA email to say that Page was “not a source” for the agency. Despite rampant speculation that Durham might release a report prior to the November election, that didn’t happen.