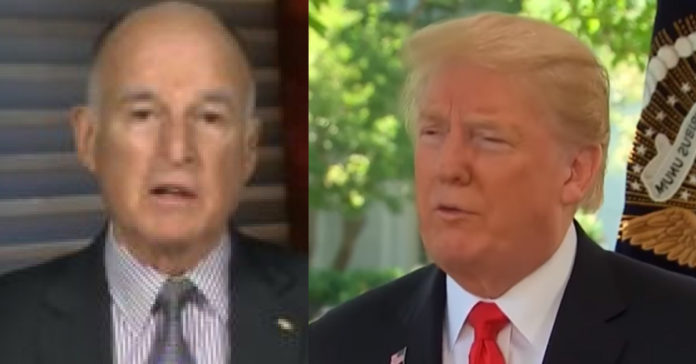 Jerry Moonbeam Brown wants to be president. He has run for the highest prize before and has hinted at taking another shot at the crown.

It never gets out of your blood, they say about running for president, which explains Hillary’s early (and odd) political moves.

What a gift she would be to Trump…

Until then we have jealous Jerry Brown who called Trump stupid after Trump turned him green with envy by showing what real power looks like.

Under the Obama administration, the Environmental Protection Agency called for the fuel economy standards for new vehicles to ratchet up over time. The increasingly strict standards were designed to combat climate change by reducing greenhouse gas emissions.

On Thursday, the EPA and the National Highway Traffic Safety Administration released a new proposed rule that would instead freeze the standards at their 2020 levels for six years.

The agencies say that increasing fuel efficiency requirements contributes to an increase in the cost of new cars and trucks, which may discourage consumers from buying new vehicles. Because newer vehicles have advanced safety features, the administration argues, increasing fuel economy requirements therefore harms highway safety, as well as having economic effects.

“Cars and trucks are just part of the basic fiber of the American economy and the American experience so we take what we’re doing very, very seriously,” Bill Wehrum, EPA assistant administrator, told reporters on Thursday.

The EPA has argued that the federal standards imposed by the Obama administration are burdensome on auto manufacturers. However, “major automakers have repeatedly said they do not back freezing the requirements but have called for changes to take into account fuel prices and shifting consumer demand,” Reuters says.

The proposed rules also call for eliminating California’s power to set its own auto emissions standards, a powerful tool the state has used to try to curb greenhouse gas emissions.

Because of a federal waiver, California has been allowed to set its own tailpipe emissions standards that are more stringent than federal law.

This is a privilege that California alone has, as NPR reported: “Other states can follow California’s lead or the federal government’s lead but they aren’t allowed to strike out on their own.”

The proposed rules call this practice a “fundamental and unnecessary complication” to regulations, and proposed replacing them with a less-stringent set of rules applying to all 50 states.

“California will fight this stupidity in every conceivable way possible,” California Gov. Jerry Brown said in a statement on Thursday.