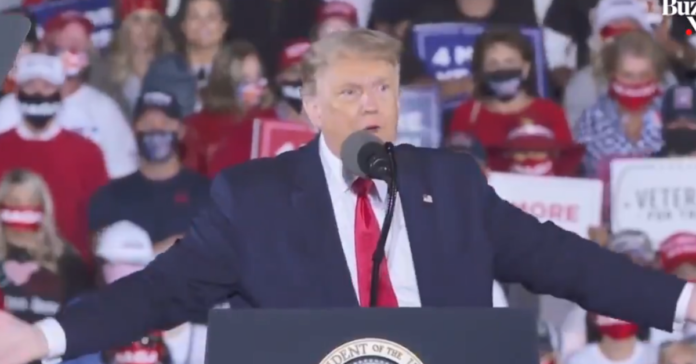 President Trump held multiple rallies yesterday as he closes out the election campaign and he delighted the audience and liberals across America by joking he may leave America if he loses.

“I will deliver optimism, opportunity and hope, and that’s what we’re doing, and this is why we have this kind of spirit, and I hate to say it because I don’t want to insult Georgia, but it’s this way all over our country,” Trump said mocking the media.

“I shouldn’t joke because you know what? Running against the worst candidate in the history of presidential politics puts pressure on me,” he added.

“Could you imagine if I lose? My whole life, what am I going to do?”

“I’m going to say ‘I lost to the worst candidate in the history of politics.’ I’m not going to feel so good,” he added before saying:

“Maybe I’ll have to leave the country? I don’t know.”

Trump said at a campaign rally in North Carolina last month that “If I lose to him, I don’t know what I’m going to do. I will never speak to you again.”

Trump has made similar jokes before. In 2016 he said that if he lost the Republican nomination for he would disappear.

Trump says he may leave the US if Biden wins. pic.twitter.com/XmbtYpNDoh