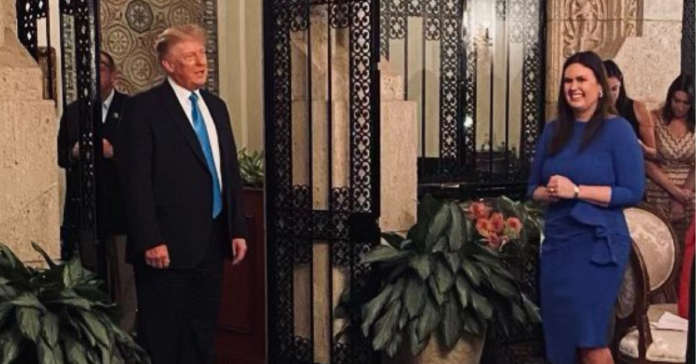 Former President Donald Trump made an appearance at a campaign event for his former spokeswoman Sarah Huckabee Sanders over the weekend.

“As governor, I will defend your right to be free of socialism and tyranny, your Second Amendment right, your freedom of speech and religious liberty,” Sarah said in a video announcing her campaign last month and immediately she shot to the top of the polls.

She made such an impact that one of her key rivals for the race dropped out and will run for a lesser office.

“Great weekend on the campaign trail featuring a surprise appearance at one of my events by President Trump,” Sanders said Sunday.

“I took on the media, the radical left, and their cancel culture, and I won,” Sarah said when she announced. “As governor, I will be your voice and never let them silence you.”

“Sarah is strong on borders, tough on crime and fully supports the second amendment and our great law enforcement officers,” Trump said when she announced giving her his full endorsement.

“She loves our military and veterans — and her home state of Arkansas. She will be a great Governor and she has my complete and total endorsement.”

Sarah Huckabee Sanders served as White House Press Secretary for President Donald J. Trump from 2017 to 2019. A trusted confidant of the President, Sarah advised him on everything from press and communications strategy to personnel and policy.

For two and a half years, Sarah worked closely with the president, battling with the media, working with lawmakers and CEOs, and accompanying the president on every foreign trip, including dozens of meetings with foreign leaders. Sarah is only the third woman – and the very first mom – to ever hold the job of White House Press Secretary.

Upon her departure from the administration, President Trump described Sarah as “irreplaceable,” a “warrior” and “very special person with extraordinary talents, who has done an incredible job.”

Sarah joined the Trump campaign as a senior advisor in February 2016 during the Republican primary, and continued in that role through the President’s historic defeat of Hillary Clinton.

In 2007 and 2008, Sarah helped lead her father, former Arkansas Governor Mike Huckabee, to victory in the Iowa Caucuses and seven other states as his national political director. Sarah served in the Department of Education during President George W. Bush‘s administration, and was campaign manager of the ONE campaign, a global non-profit founded by U2’s Bono to take action to end extreme poverty and preventable disease, particularly in Africa.

Great weekend on the campaign trail featuring a surprise appearance at one of my events by President Trump! pic.twitter.com/mn81i9AbsU