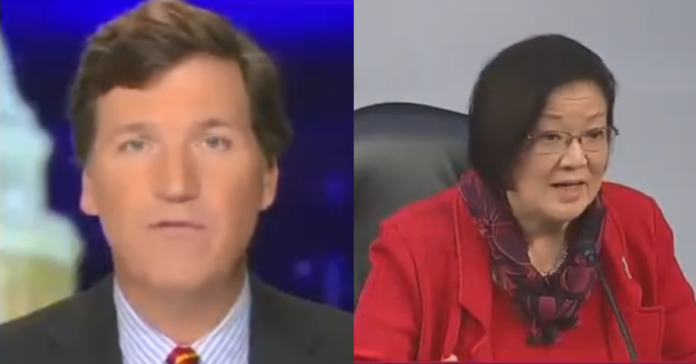 Carlson went after Hirono for her taking issue with Amy Coney Barrett using the phrase “sexual preference,” which the Democratic senator said was “offensive.”

“So the world is falling apart. China is taking over the world. The American economy is in shambles. And there’s a presidential election in three weeks,” Carlson said Wednesday.

“But luckily, America’s dumbest senator, Mazie Hirono of Hawaii, is upset about the right things — the term ‘sexual preference.'”

“As it turns out, she didn’t know that herself until some left-wing Twitter personality made that discovery yesterday morning,” he added.

Carlson then showed images of the Merriam-Webster dictionary which actually updated its definition of “preference” following Hirono’s remarks to label “sexual preference” as an offensive term.

He then dropped the hammer and showed Democratic presidential nominee Joe Biden and Justice Ruth Bader Ginsburg using the term.