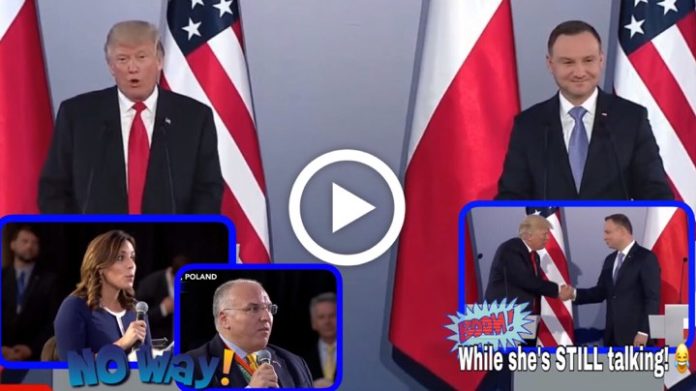 The CLM (Crooked Liberal Media) Traveled to Europe with President and EMBARRASSED the Whole NATION!

The Polish people love America and they love President Trump. Last night, when President Trump and First Lady Melania Trump arrived in Warsaw, the streets were packed with people there to welcome them.  (VIDEO BELOW)

This morning, President Trump held a joint Press conference with Polish President Andrzej Duda. President Trump started by talking about the mutual admiration and respect that Poles and Americans have for each other. He went on to talk about the first shipment of liquid natural gas that was just shipped from the US to Poland last month, and his desire to make sure  Poland’s options for energy are no longer controlled by Russia only.  (VIDEO BELOW)

When it was time for four questions to be asked of the two presidents, the first American reporter started off strong by asking about North Korea but went downhill rapidly from there. Before President Trump could even begin to answer the first question, he felt he just had to ask the silly CNN wrestling video that they are obsessed with. President Trump did a great job of answering the question and explaining why CNN is “fake news,” but it’s just a shame that our press corps could not have just left that sillyness at home, and asked appropriate questions. It is disgraceful. Give me a break. (VIDEO BELOW)

The second American reporter started off good as well, but then she embarrassed herself and embarrassed our country. She was just bound and determined to ask an extra question and would not be quiet. It was quite rude. At the end, both presidents are just forced to ignore her and shake hands, while she is still rudely yapping.

After Morning Joes Rips Stormy as “Not Credible”, WATCH him Destroy Anderson Cooper For Not Asking Questions

Democrats Doing Their Own “State of the Union.” Are They Sending Their BEST?