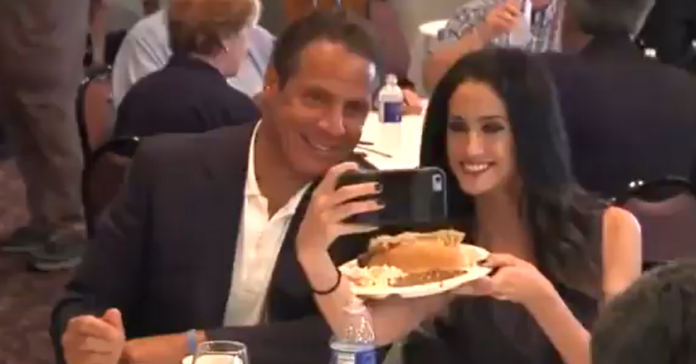 A shocking video just leaked that paints New York Governor Andrew Cuomo in the creepiest possible way. He smirks for the camera while tossing sexually suggestive questions at a female reporter.

In the video below, you can see Gov. Andrew Cuomo telling a female journalist to “eat the whole sausage” in front of him at the 2016 New York State Fair.

“I want to see you eat the whole sausage,” the Dem governor is heard telling then-NewsChannel 9 reporter Beth Cefalu.

“I don’t know if I should eat the whole sausage in front of you, but I’m definitely going to eat it,” said Cefalu.

“I was not pressured/harassed this is two people enjoying the one event – the NYS fair – that gives them a little more freedom to be informal,” Cefalu tweeted today. “It’s really sad it’s being turned into anything more.”

Cuomo issued a statement apologizing for his behavior towards two other women after they accused him of inappropriate behavior. Oddly, he seemed to blame the victims.

He said: “Questions have been raised about some of my past interactions with people in the office.

“I never intended to offend anyone or cause any harm. I spend most of my life at work and colleagues are often also personal friends. At work sometimes I think I am being playful and make jokes that I think are funny. I do, on occasion, tease people in what I think is a good natured way. I do it in public and in private.

“You have seen me do it at briefings hundreds of times. I have teased people about their personal lives, their relationships, about getting married or not getting married. I mean no offense and only attempt to add some levity and banter to what is a very serious business.

“I now understand that my interactions may have been insensitive or too personal and that some of my comments, given my position, made others feel in ways I never intended. I acknowledge some of the things I have said have been misinterpreted as an unwanted flirtation. To the extent anyone felt that way, I am truly sorry about that.

“That’s why I have asked for an outside, independent review that looks at these allegations.

“Separately, my office has heard anecdotally that some people have reached out to Ms. Bennett to express displeasure about her coming forward. My message to anyone doing that is you have misjudged what matters to me and my administration and you should stop now – period.”

I was not pressured/harassed
this is two people enjoying the one event – the NYS fair – that gives them a little more freedom to be informal. Its really sad it’s being turned into anything more. https://t.co/sISlRUR8ER