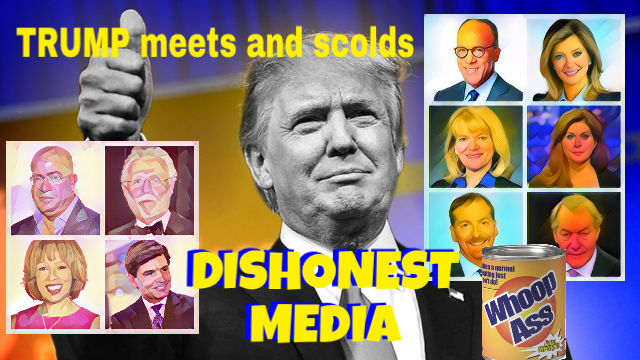 The New York post has reported that President-elect Donald Trump had a huge “sitdown” today with high level executives from most of the big media outlets.  Apparently this was not a let bygones-be-bygones/Make America Great Again pow wow like he had with Mitt Romney yesterday. In fact it appears that he sat them down and ripped them a new one (my take on it, not from the Post 🙂 ).

According to the NY Post it was an off-the-record sitdown at Trump Tower and one of their sources said “It was like a f***ing firing squad”.

Holy WOW!! Can you  imagine?  The NY Post’s source also said  “Trump started with [CNN chief] Jeff Zucker and said ‘I hate your network, everyone at CNN is a liar and you should be ashamed.’ (Source: NY Post)

The shocked reporters and executives barely got to say anything.  Gayle King and Chuck Todd were two of the few  attendees that really got to ask President Trump any questions with King reportedly asking  ‘How do you propose we the media work with you?’ 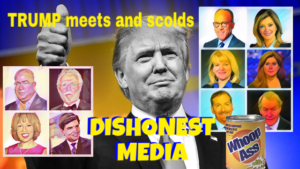 The NY Post (Source: NY Post) reported that a second source said “Trump kept saying, ‘We’re in a room of liars, the deceitful dishonest media who got it all wrong.’ He addressed everyone in the room calling the media dishonest, deceitful liars. He called out Jeff Zucker by name and said everyone at CNN was a liar, and CNN was [a] network of liars.”

This was an off-the record meeting and the plus the Crooked Media would hide this anyway so  please SHARE SHARE SHARE! Show President-elect Trump you CARE!!!

President Trump plans to meet with Arthur Sulzberger, publisher of The New York Times, on Tuesday.  I don’t envy that dude.  How about you?

President-Elect Trump thanks you for your vote!