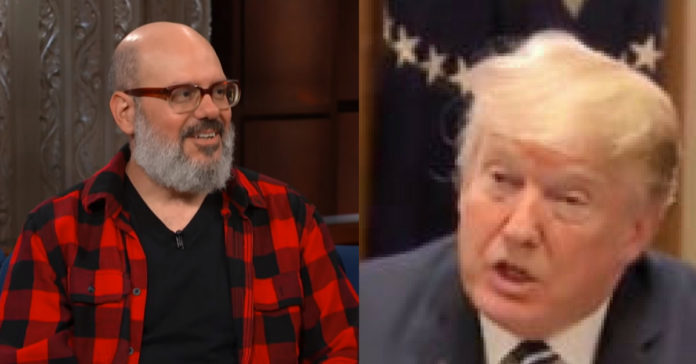 All I can say is wow… this is the perfect way for the left to get crushed in the midterms.

The midterms are a referendum on Trump, make no mistake about that and as usual Hollywood thinks their opinion matters.

It doesn’t, in fact when the stars wade into politics it usually backfires.

As reported by Breitbart: Actor-comedian David Cross recently joked about beating President Donald Trump “to a bloody pulp” and urinating and defecating on him, according to a new report.

The Salt Lake Tribune reports that during Cross’ performance at the University of Utah Wednesday, he “included humor about abortion, Nazis, the Holocaust, terrorist bombings, AIDS and beating President Donald Trump to a bloody pulp and then urinating and defecating on him.”

The 54-year-old actor is best known for his role as Tobias Fünke in the hit Netflix show Arrested Development.

He said he was genuinely shocked that it was “so upsetting to so many people. But I’m not using that as an excuse at all, because although I didn’t know that it would be so deeply offensive, I also don’t give a s—.”

Clearly, he did not. His surprisingly long set — which ran just 10 minutes short of two hours — included humor about abortion, Nazis, the Holocaust, terrorist bombings, AIDS and beating President Donald Trump to a bloody pulp and then urinating and defecating on him. So, no, an ad featuring temple garments didn’t seem out of character.

Cross didn’t back away from the topic. He said he’d never before seen the words “underwear” and “sacred” in unison, “but when they’re put together, they’re hilarious.”

He said the controversy “was just a reminder of how thrilled and satisfied and happy it makes me to know that I will never be affected by a photoshopped picture of a dude in long johns that you can get at a Target. You can go to a Target and get something that looks very similar.”

And the good-size crowd — several hundred — at Kingsbury ate it up, cheering and hooting in approval.

After Viciously Bashing Trump At VMA’s, Hollywood Gets Brutal Wake Up Call From Middle America

Hollywood Legend Admits Truth, Says Trump Will Go Down As Greatest President In History Of USA

After Bashing President Trump For 2 Years, Hollywood Gets Its Just Deserts From American Public