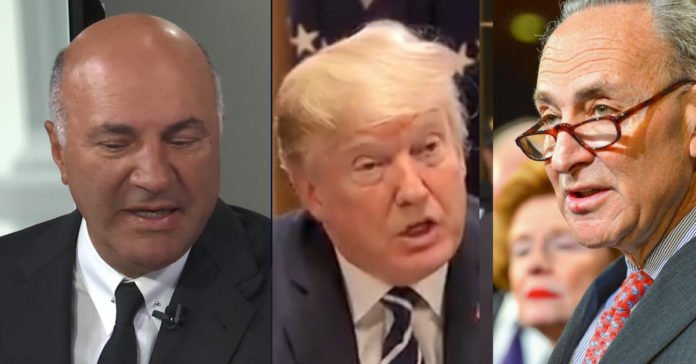 The left is out to get Trump because he sticks to his guns and does not bow to their pressure.

Also, and this is important, they just don’t like his style. How else to explain their 180 on various issues?

The left, or a large percentage of them, have always been in favor of strong tariffs to protect the American worker.

The Clinton’s sold them out and took the big money and the rest is history but many people did favor Trump’s policies before they were Trump’s.

We are simply looking for consistency on both sides.

“I would say on a policy basis, I’m going to have to give it an 8 1/2 out of ten so far,” O’Leary, an entrepreneur who appears on ABC’s “Shark Tank,” told Hill.TV’s Buck Sexton on “Rising.”

“The reduction of regulations has been remarkable in how it has accelerated small business,” he said. “These things are quietly being changed, and I really — I credit the administration for doing this. They’re making it easier to run a small business in pretty well every state I’m involved in. So that’s working.”

“I do a lot of investing in private companies all across America,” O’Leary added, noting that his investment portfolio includes more than 34 firms. “We’re having one of the best years we’ve ever had — not because of tax reform yet, that’s coming, that’s the upside in the next year or so.”

Trump signed an executive order within the first month of his presidency aimed at dramatically scaling back federal regulations. He said the order, which requires agencies to revoke two regulations for every new rule they want to issue, would benefit both small and large businesses.

Critics said the policy would contribute to the weakening of public protections provided by agency rules and regulations.

O’Leary credits Trump with putting in place competent economic managers such as Commerce Secretary Wilbur Ross, Director Larry Kudlow and Treasury Secretary Steven Mnuchin. O’Leary says deregulation and tax reforms are already a done deal, and trade is the next item on the agenda.

“Their message is clear: They are going to keep ratcheting up tariffs until the eurozone and China come to the table,” O’Leary said. “They care about the North American Free Trade Agreement and the Asian trade protocol, too, but these have been pushed to the back burner while they focus on the big dogs, China and Europe.”

The president is receiving steady criticism for his tough stances on trade, but if his policies were really that bad, the markets would reflect that, O’Leary said.