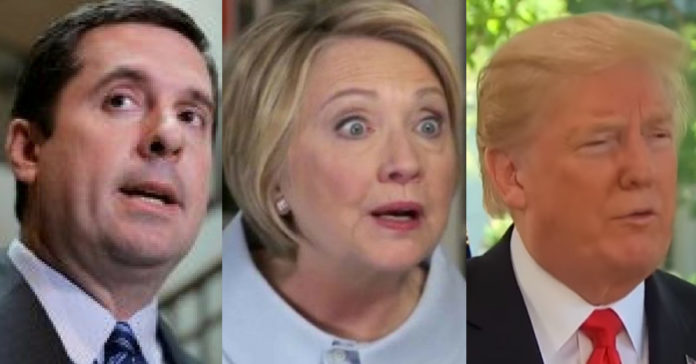 Look, the whole Russia investigation is totally full of contradictions and half truths and subplots and reads like a dime story spy novel.

Like keystone cops, the inexperienced Trump campaign bumbled into a meeting with Russians and then all heck broke loose in the media.

Sure it makes a good story but is any of it a crime? Not according to legal experts like Alan Dershowitz. At least not what has been revealed so far.

But what Devin Nunes just revealed about Hillary may very well send her straight to jail.

As reported by The Washington Examiner: House Intelligence Committee Chairman Devin Nunes declared Sunday that Hillary Clinton’s campaign “colluded” with nearly every top official in the Justice Department and FBI.

An interview on Fox News had turned to the topic of Trump dossier author Christopher Steele and his ties to Bruce Ohr, a high-level DOJ official who fed the FBI information from the ex-British spy even after he was cut as a source for providing confidential information to the media.

Ohr’s wife, Nellie, was employed by Fusion GPS, the opposition research firm that commissioned the dossier in an effort that was funded in part by Democrats, to assist in the cultivation of research on then-candidate Trump. Nunes stressed the need to have her testify too.

“She also was working for Fusion GPS, working for the Clinton campaign,” he said. “So here you have information flowing from the Clinton campaign from the Russians, likely I believe was handed directly from Russian propaganda arms to the Clinton campaign, fed into the top levels of the FBI and Department of Justice to open up a counter intelligence investigation into a political campaign that has now colluded [with] nearly every top official at the DOJ and FBI over the course of the last couple years. Absolutely amazing.”

Nunes and fellow GOP chairmen Trey Gowdy, R-S.C., and Bob Goodlatte, R-Va., have pressed the DOJ for months for documents related to the Russia and Hillary Clinton emails investigations, with some success. However, Nunes complained that the DOJ has been slow to comply.

He also said there needs to be “an investigation into these top-level people as to how somebody concocted the idea that it’s okay to take information from one political campaign and use it to open up an investigation on the other political — on somebody else’s opposing political party.”

Nunes and other Trump allies in Congress have said they have seen no evidence that would have justified the Obama administration to open up a collusion investigation into the Trump campaign.

Asked if there will be accountability in the DOJ and FBI, Nunes declined to say if he expects there to be prosecutions, but did emphasize his call to the president to release the unredacted FISA warrant applications to spy on Page.

“The only way there could be accountability is one step at a time and it deals with full and complete transparencies,” Nunes said. Full sunlight on as many of the documents that don’t endanger national security, which from our committee members, we’ve sent a letter to the president, we don’t believe they’re going to jeopardize any sources or methods. And I think people I have said many times are going to be shocked as to what went into a FISA warrant against Carter Page and even more importantly, what did not go into the FISA application, that was not presented to the court involving the information that they had on Carter Page.”