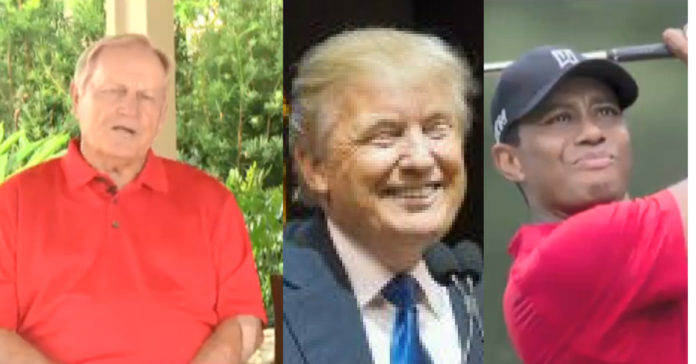 The left was stunned when Tiger Woods came out and smacked them around by reminding them we respect the office of the President and not the man.

Tiger took a lot of incomings for daring to tell the truth to the liberal hysterics. Today, Jack Nicklaus came out strongly in support of both men.

As reported by Fox News: Golf legend Jack Nicklaus backed Tiger Woods’ comments about respecting the President of the United States in an interview Wednesday on “Fox & Friends.”

Woods shot down questions over the weekend about his relationship with President Trump, urging people to respect the office of the president, while declining to comment on political matters.

At the end of a tournament in New Jersey, Woods was asked if he had anything to say regarding his “friendly relationship” with Trump.

Nicklaus said that Woods – whose 14 major tournament victories are second to Nicklaus’ all-time mark of 18 – handled the question well and that he agrees with his answer.

“No matter who’s president — whether it was Barack Obama or Donald Trump — I think you respect the office, and I’m much in Tiger’s camp on that,” he said.

Nicklaus endorsed Trump during the 2016 election, telling CBS that he was “awakening the country.”

Jack Nicklaus: “No matter who’s president, whether it was Barack Obama or Donald Trump, I think you respect the office.” pic.twitter.com/qKVlBMzzfr