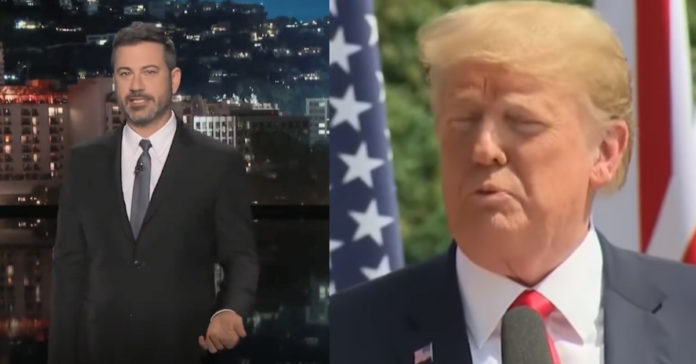 Trump is under siege and the media is going in for the kill. Of that, there is no doubt.

Luckily for Trump, the media and Hollywood overreacting in typical hysterical fashion to every darn thing is just what he needs to keep the wolves at bay.

“We thought yesterday was the craziest day of this ridiculous presidency,” the comedian said. “Turned out today made yesterday feel like a visit to historic Gettysburg.”

He continued, “The news today is our president is a liar, and not even a good one. President Trump today, in an attempt to explain what-the-Helsinki was going through his cotton candy-covered head when he stood next to Vladimir Putin, of all people, and took sides with Russia over our own American intelligence agencies, now says it was just a tiny little slip-up, even smaller than his fists.”

Kimmel added crudely that he’d rather have a chimpanzee as president than Trump.

“I would rather we had a chimpanzee as president of the United States. At least with the chimp there would be someone to eat the bugs out of Rudy Giuliani’s hair.”

Keep it up Jimmy you are not helping your cause.

Look, the left is doing everything it can to lose the ever important midterms because they lack a coherent message.

They need one other than Trump’s a monster if they stand a chance in the fall.

Jimmy Kimmel Tries To Shame Kanye For Supporting Trump, Kanye Embarrasses Him On His Own Show