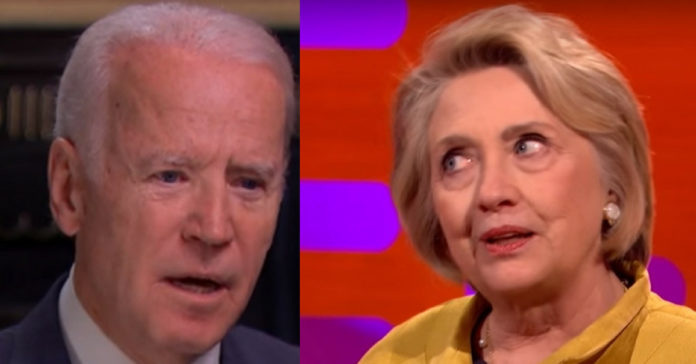 Joe Biden was interviewed for a new book about Vice Presidents and power and in it he takes a few jabs at Hillary. Why not? She deserves it.

Democracy worked – America took a chance and elected a businessman despite the doomsday scenario’s painted by media and the establishment.

It worked, we were right – America is back like never before and the rest of the world is finally realizing there is a new sheriff in town.

That didn’t happen by accident, but rather by the last election.

And before Trump’s incredible success become the story history tells, we should remember how close this election was.

How we almost had a spineless, backstabbing, narcissist concerned with covering her own ass above all else, even at the expense of this great country.

Later, when Clinton made the false claim during the campaign that she was completely in support of it, Biden was furious. Axelrod, Obama’s top strategist, said, “My sense is that she was not sold on the idea either.” Biden clearly resents the way Clinton mischaracterized her position. One aide said: “The ass covering, opportunistic version really rattled him.” Biden advised against the raid, he said, “to give room, because then I walked out with him [Obama], which I always did, and walked to the office. I said, ‘Follow your instinct. I think you should go, follow your instinct.’ I could tell that was his instinct.” Biden said he fell on his sword so that Obama would look like he made the call on his own. “I wanted people to know what a chance this guy took. If I had said that I said to go [at the time] then it would make me look like I was ratting out everybody else.” Press reports made it seem like Biden was one of the lone voices against what ended up being a successful raid that won Obama widespread praise. “That’s the job of the vice president,” Biden said. “You’re supposed to throw yourself in front of the train. That’s one of the reasons I didn’t want to do it [become vice president] in the beginning.”

But we made the right choice and history, due to Trump’s great successes, won’t even mention Hillary’s name.