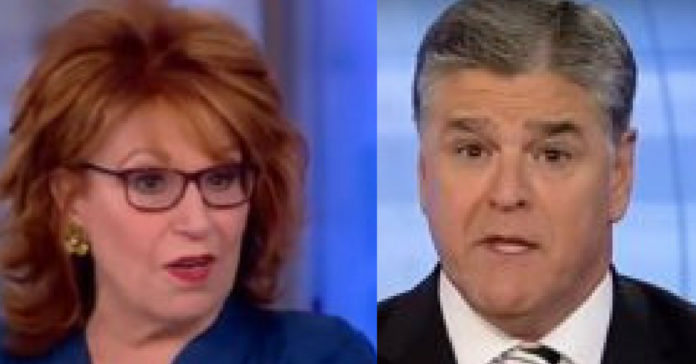 Joy Behar continues to disgrace and at this point, one has to wonder why she even has a job.

Where are the standard in our media these days? Where did accountability go?

Michael Avenatti on Friday morning served as a guest host on The View and within the first two minutes of the show he was already trolling Sean Hannity.

After Joy Behar introduced him as “the only person Donald Trump fears more than Robert Mueller,” she added, “The other person I think is afraid of you is Sean Hannity.” She asked Avenatti why Trump’s favorite Fox News host has refused to have him on for a primetime debate.

“Because I think he talks a very good game,” Avenatti replied. “But when it really comes down to it he doesn’t want anyone on his show to challenge him.”

“I think it’d be a great show,” Avenatti continued. “The ratings would be good. And I think the American people would probably learn a lot about the case and the facts.”

While Behar suggested Hannity is “scared” of Avenatti, the show’s other guest host Ana Navarro had a different idea. “At this point Sean Hannity’s program is basically state-sponsored media,” she said. “We know Donald Trump watches it. We know he’s got almost unfettered access to Donald Trump. And I don’t think Donald Trump would like to see Michael Avenatti having that platform.”

To help assuage Hannity’s fears, Avenatti said he’s offered to come on the show with Trump’s lawyer Rudy Giuliani so they could argue both sides of the case. But as Behar put it, “That’s kind of not a fair fight, you still have all your marbles.”

Guess who is number one in all of cable news Joy? Not you for sure.

No, Sean Hannity is number one and by a wide margin.