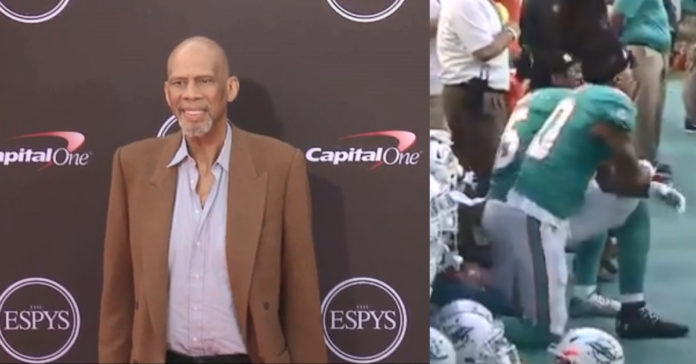 Kareem Abdul-Jabbar just went too far with his comments in the National Anthem and the disgraceful kneeling NFL players.

Look, there is a simple solution – get off your damn knees and show some respect. Ther are other ways to protest, some positive like actually investing in these communities they profess to help.

LeBron did (although it turned out later that taxpayers will share the burden) but at least he put some money into the game.

And until the others do they have zero credibility. Like this guy.

As reported by Fox News: NBA legend Kareem Abdul-Jabbar likened the national anthem to songs that were sung by slaves while they were forced to do manual labor.

Abdul-Jabbar, 71, in a Tuesday column for The Hollywood Reporter, recanted what Frederick Douglass said in “My Bondage and My Freedom.”

“Slaves are generally expected to sing as well as to work.” Abdul-Jabbar wrote, adding slaves had to sing their “oppressor’s feel-good songs” as well.

He wrote that the “Star-Spangled Banner” is the song that President Trump – the oppressor – is demanding to be sung.

“Currently, the song being demanded is the national anthem during football games. But during a warm-up game on Aug. 10, despite President Trump’s previous condemnation, several Eagles players kneeled during the anthem or raised their fists — their way of singing their own song,” he wrote.

“For them, lyrics like ‘land of the free’ don’t accurately represent the daily reality for people of color. They love their country but want that country to recognize the suffering that occurs when it isn’t living up to its constitutional promises.”

The NBA’s all-time leading scorer reacted to Trump saying NFL players wanted to show their outrage at something they’re “unable to define.”

“Who would know better how to define their outrage: the privileged darling of white supremacists, the 94 percent-white team owners, the 75 percent-white head coaches or the 70 percent-black players who actually take the field each week?” Abdul-Jabbar asked.