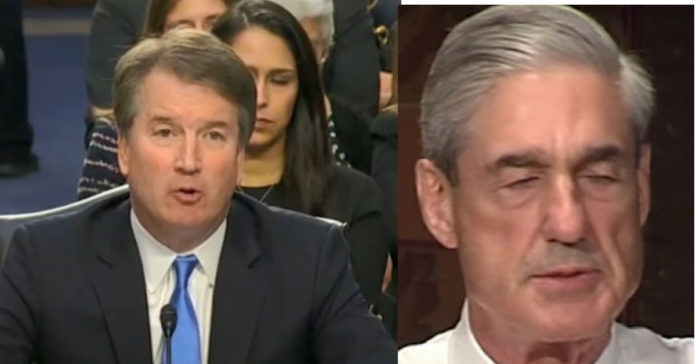 The left has gone all in Bob Mueller to save them from their past mistakes and President Trump and the desperation shows.

If Mueller comes up empty, it’s lights out on the left. They don’t have the votes really to do anything to Trump and won’t for all practical purposes after the midterms.

Even if the left sweeps, they will not have the votes to really do anything but annoy Trump. What they need is Mueller and that is why what Kavanaugh admitted spells doom for the whole investigation.

Judge Brett Kavanaugh declined Wednesday to recuse himself from cases involving President Trump’s legal entanglements should he reach the Supreme Court, angering Democrats who said they were “troubled” by his refusal.

The recusal question looms large over Judge Kavanaugh, with Democrats saying the fact that he was picked by a president with legal troubles poisons his entire nomination. They’ve said the solution is to announce he wouldn’t sit in judgement of Mr. Trump.

“I should not and may not make a commitment about how I would handle a particular case,” he said, adding that decisions on whether to sit or recuse himself were included in that policy.

While lower court judges are bound by recusal rules, there are no such strictures for Supreme Court justices, who set their own policies.

Sen. Richard Blumenthal, the Connecticut Democrat who pressed him for the recusal, said the country is in “unprecedented territory” with Mr. Trump and this nomination, after one of the president’s former lawyers pled guilty this summer to campaign finance violations — and said he committed the violations at the urging of then-candidate Trump.