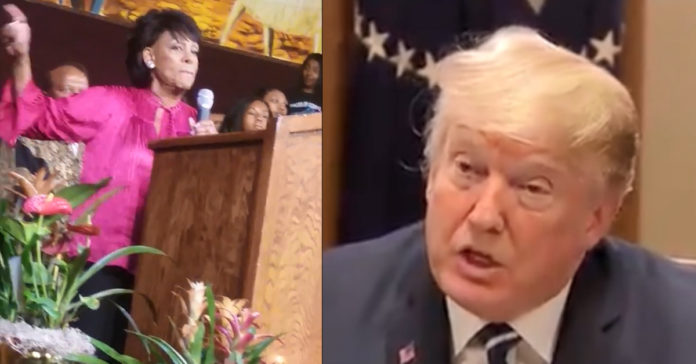 Maxine Waters, say what you will about her, knows how to pump up a crowd. She seeks publicity and to line her pockets like most politicians, but she goes too far on many occasions.

She just admitted that even the Democrats thinks she goes too far on Trump for them…which is saying a lot.

Then she spoke about God and Trump and lost every sane American.

Wanting to address what people are reading on the “social internet,” she said, “We never dreamed we’d have someone in the White House who was divisive, who could not tell the truth, and who was intent on not making America great again, but taking America down.”

She hammered Trump, telling the congregants, “I am in this fight.”

Waters told the audience about the difficulties of the “housing crisis” in America.

She said she’s pushed back on Democrats who have said to leave Trump alone.

“I’ve said that we can walk and chew gum at the same time,” Waters said, and a church goer yelled, “Say it!”

Waters ended her remarks by claiming God has sent her on her mission against Trump.

“You’ve gotta know that I’m here to do the work that I was sent to do, and as pastor said to me when I came in this morning, when God sends you to do something, you just do it!

“So I have a message I’m going back to Washington tomorrow morning, I’m going to tell them pastor told me to come here and just do it!”