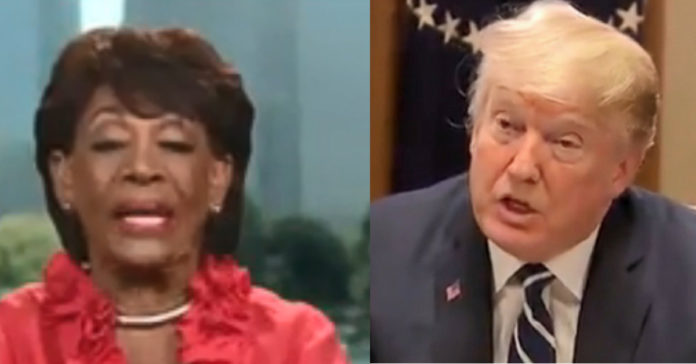 Maxine Waters is at it again and running around on any TV that will have her to do what she does best – bash President Trump.

Why do these networks still give her time on the air? It is a legitimate question and one MSNBC and the rest need to answer.

For her own good to be honest because every time she opens her mouth to bash Trump she proves Trump correct about what he has said about her.

Sunday on MSNBC’s “AM Joy,” Rep. Maxine Waters (D-CA) predicted “many” of the people who voted for President Donald Trump were going to “move away from him.”

On Trump saying she has a  “low I.Q.,” Waters said, “I’m not going to be diverted in what I’m doing to bring attention to this lying con man. I going to continue to resist him. I going to fight and tell the truth about him. I’m not going to allow him to somehow intimidate me. I don’t care what he says about me. I know who I am. I know what I do. I am the ranking member of the Financial Services Committee of the United States House of Representatives.”

She continued, “I have been after him from the minute he revealed himself and defined himself when he was running for office, when he disrespected women and talked about grabbing women by their private parts. This is a lying, deplorable, divisive, dangerous man who does not deserve to be the president of the United States. He can say anything he wants to say about me, my friends and others like LeBron James or Don, any of these people. I know that he is trying to get us away from pointing out who he really is and defining him for what he is. I’m not going to stop. I’m in this fight.”

Waters said, “Listen, he is trying to frighten, you know, whites about Maxine Waters. Here is this black woman and she is controversial and she said things about me. She does not move away from her position on impeachment. He is trying to frighten them. It’s not going to work. In the final analysis, even some of the people who voted for him who will be hurt by the tariff policies and is going to be hurt by his tax policies are going to see who he is eventually. Many of them are going to move away from him. I know there is a lot of talk about his constituency and the people who are going to stand with him no matter what he does. It’s not enough of them. They are not going to win. We are going to win. Because we are on the right track for protecting our democracy, we are the real patriots who are standing up for what we believe this democracy is all about.”