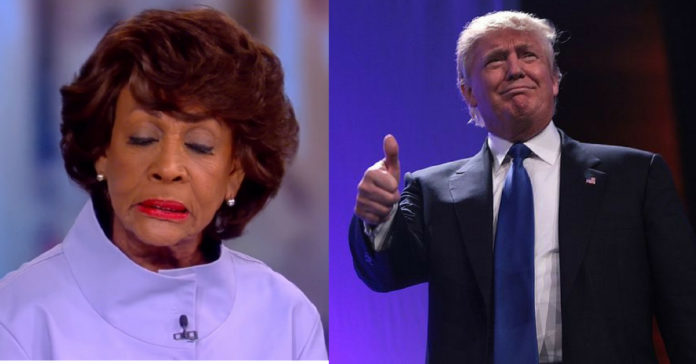 The left in America has completely lost their mind under their Trump derangement syndrome.

It is a sad sight indeed and none worse than Maxine Waters. Ever desperate for publicity, Maxine will say things no smart politician ever does in public.

California Rep. Maxine Waters said that Americans should be “out in the streets screaming” about President Trump in a Wednesday interview.

“I don’t know why people take it. I think Americans should be out in the streets screaming to the top of their voice. Do something. Make something happen,” she continued.

During the interview, she also said, “[Trump is] one of the most deplorable people I’ve ever encountered in my life.”

The California Democrat was interviewed by host John Harwood during a CNBC event and poked at Trump, who regularly pokes at her, and she suggested that racism was involved. She also claimed that the president was employing tactics against his critics suggested by Russian President Vladimir Putin.

But, she added, “I don’t care what he says. He can do whatever he wants to. I know what I’m going to think about him. I think that this man does not deserve to be the president of the United States. He is one of the most deplorable people I’ve ever encountered in my life.”

And, she warned, “He can call me whatever he wants do. He does not intimidate me, and I’m not gonna stop talking about him.”

Harwood asked if Democrats would try to impeach Trump if they win the House. Waters said she didn’t know, but added, “I certainly think that he is eligible for impeachment.”

If Maxine and the hapless Democrats make the next election about Trump they are going to be in for a shocker in November.