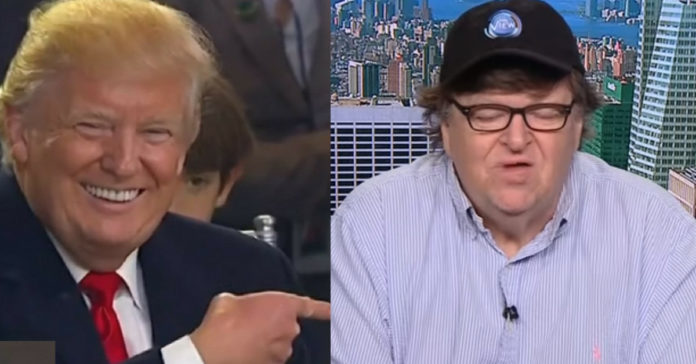 Michael Moore just insulted the majority of Americans in another tone-deaf interview. The left really has no idea how to beat Trump.

Believe me, insulting American voters is not the way forward in 2018 or 2020. But that is all the left has to use because the vast majority of Americans think they are hopelessly hypocritical and corrupt.

As reported by Breitbart:Tuesday on MSNBC’s “Hardball,” filmmaker Michael Moore argued that the election of Donald Trump as president was the result of what happens when you “dumb down a country.”

Moore said, “There could definitely be a tsunami of women and young people and people of color at the polls on November 6. I think everybody knows this is the most important election. People ask me, what do you think about 2020? Who should run in 2020? My answer is, ‘I don’t even know what 2020 is.’ There’s only one election, the most important election, and that’s November 6. So if people get out, I think that there’s enough good candidates, really good candidates this time that are running.”

He continued, “What I fear not maybe so much from the president is what I fear about ourselves. I think we already got Trump’s number. He’s an autocrat. He doesn’t like democracy very much. But you can say that about just about every CEO. They don’t run their businesses as democracies. So they’re not inclined to that. And the idea of one person-one vote, there’s 325 million of us and less than 1,000 of them. So that one person/one vote thing isn’t good if you’re rich. I think what’s important here when you talk about the 30’s in Germany, is that Germany then was a very educated, enlightened, cultured society. It was one of the most liberal democracies in the world. The Nazis won an election, and then there was a terrorist incident, the Reichstag fire. Hitler said we got to clamp down, we got to ban these parties, and he consolidated power during the time when people were afraid. That’s what I’m worried about. That whatever happens under Trump, whatever national emergency, a real emergency may happen, that we do not allow him to take away our democratic rights because he has to protect us. That’s what we have to be very, very cautious of when that point happens. And so I point that out in the movie that there are these parallels. But as far as fascism, there was a book I read a number of years ago called “Friendly Fascism.” the author said the fascism of the 21st century would not come with concentration camps and swastikas, it will come with a TV show and a smiley face.”

He added, “That is really how Trump and others like him are trying to commandeer the American public through this kind of propaganda and also by helping to dumb down the country. Our schools are not what they used to be. Our libraries are closing. We have less and less of a diverse press. When you dumb down a country, you end up with a Donald Trump.”

Michael Moore Finally Agrees To Move To Canada On One Condition