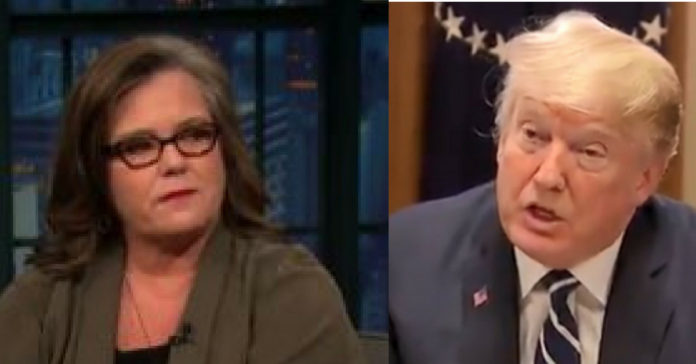 Rosie O’Donnell has no class and Trump was right about her. Remember during the debate when Trump brought down the house with his “only Rosie” line?

After what Rosie just said on MSNBC, expect Trump to hit back hard.

Comedian Rosie O’Donnell warned on Monday that President Trump’s attacks on the press could lead to someone getting hurt, suggesting that it may take a journalist’s death to silence the president.

“When someone dies, maybe he’ll shut up,” O’Donnell, whose feud with Trump predates his political career, said in an interview on MNSBC. She also accused Trump of encouraging political violence and empowering racists.

“He’s doing dog whistles everyday and he’s shouting out to people who try to fight off their own internal racism. He’s encouraging them,” she said. “It’s crazy to me, the people he attacks. And someone will get hurt. Someone will die.”

Trump has made slams against the media a hallmark of his political style, frequently accusing news outlets that cover his administration of producing “fake news.”

O’Donnell said that in the news conference with Putin Trump “swore allegiance to Russia” providing on its own enough of a reason for Congress to impeach him.

“I think Helsinki was the last straw for a lot of people,” she said. “You can’t get more blatant than what you did right there. Swore his allegiance to Russia. Not to his own country. And I believe he should be impeached.”

O’Donnell has exchanged barbs with Trump over the years. The real-estate-mogul-turned-politician has called the comedian a “pig” and a “loser,” while O’Donnell has accused Trump of being mentally unstable and unfit to lead the country.

She denied on Monday that she had ever carried on a feud with Trump. Instead, she said that he had used attacks against her as a stunt to boost his own image.

“People thought we had a feud. I’ve never spoken to the man,” O’Donnell said. “He was on my show once as a sweeper when I was making money. But I never spoke to him in my life.”

But that is not all she said in her stink bomb of an interview – she went too far and said Trump was not legitimate.

Look, this is where the left loses America – you can hate Trump and protest him and vote against him and volunteer and donate money – who cares we are all American.

But when you say he is not a legitimate president you cross the line to anarchy.

We have laws – if Trump is guilty he will face Congress, and remember even if he is guilty and the impossible happens and the GOP impeaches him, he is still and always will be a legitimate president.

He won the election – get over it, Rosie.

"I don't believe that he's a legitimate President" and "I think Helsinki was the last straw for a lot of people" – @Rosie pic.twitter.com/tSHpyEqaTZ