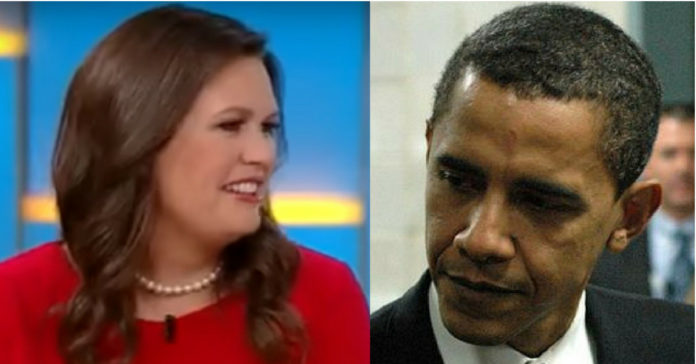 Sarah Sanders does not suffer media fools easily. She actually shows incredible patience in handling them every day.

Dealing with the White House press corps is like herding cats and Sarah does not get enough credit.

They should have given free food at that Virginia restaurant rather than ask her to leave, and if Sarah was a Democrat you better believe they would have.

It is a double standard and Sarah loves to expose them as she just did to a hapless reporter.

“Our system is a mockery to good immigration policy and Law and Order. Most children come without parents,” wrote Trump via Twitter on Sunday. “Our Immigration policy, laughed at all over the world, is very unfair to all of those people who have gone through the system legally and are waiting on line for years!”

“What is this administration planning to do to make it so you don’t have to see a judge?” Rascoe asked.

Sanders explained to the reporter that there are already “multiple instances” where there is so-called “expedited removal,” but added, “if someone comes through a port of entry, seeking asylum, those cases and that process will be heard.”

“The president has laid out what he would like to see,” the press secretary continued. “We’ve put out the things that we want to see in an immigration package, months ago. We’re still waiting on Congress to give us the ability to do that.”

Unsatisfied with Sanders’ response, Rascoe pushed back, “So unless Congress acts, nothing is actually going to change. The administration is not changing anything right now when it comes to judges.”

Sanders fired back: “You mean, are we walking around making up laws? No, because we’re not the Obama Administration. We’re enforcing the laws on the books. We’re asking Congress to do their part in the process and pass new legislation that will fix our immigration system.”

"You mean are we walking around making up laws? No, because we're not the Obama administration. We're actually trying to enforce the laws that are on the books." —@PressSec to reporter responding to a question on immigration pic.twitter.com/6XF3RqFL1X