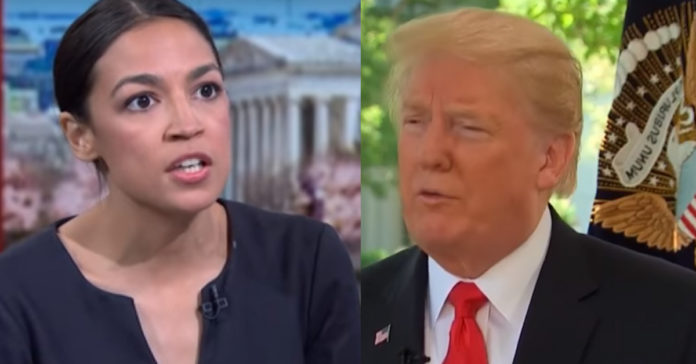 Alexandria Ocasio-Cortez came out of nowhere and shocked the Democratic establishment. Look, the Dems are in a tight spot.

They are being torn apart by two opposing forces and the leaders are terrified. They all remember how the Tea Party took over the GOP and if they don’t stop this takeover they are doomed for a generation.

During an appearance on this week’s “In The Thick” podcast, Ocasio-Cortez, when speaking about the “Abolish ICE” movement that got momentum after her primary win over Rep. Joe Crowley (D-NY), said, “But we also have to ask ourselves the question: How much is this black-box detention necessary? And you look at these facilities—we’re caging women and children, we’re jumping to criminalize people…”

The podcast’s co-host then interjected: “Kinda like ethnic cleansing.”

Ocasio-Cortez responded: “I mean we’re on that spectrum, I would say.”

This is not the first time left-wing activists vehemently opposed to President Donald Trump’s immigration agenda have made sensational accusations about “ethnic cleansing.”

After Trump referred to MS-13 illegal immigrant gangsters as “animals” earlier this year, the pro-amnesty group United We Dream group also accused Trump of “building up a racially motivated rationale for his immoral and brutal campaign of ethnic cleansing.”

All I can say is wow…