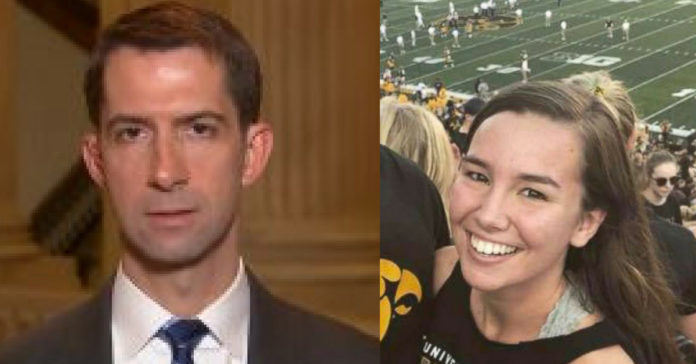 How many times does President Trump have to be proven correct before Congress gets off their butts and does their job?

It is a travesty what they are doing and the blame falls squarely on the politicians lined up to obstruct President Trump’s agenda.

The American people are not stupid and we will go to the ballot box soon and those who stand opposed to common sense immigration reforms like a strong border will be doomed to electoral oblivion.

Law enforcement announced on Tuesday that Tibbetts’ body was found in a cornfield in her rural hometown of Brooklyn, Iowa after she was last seen jogging on July 18.

Illegal alien Christian Bahena-Rivera, a 24-year-old from Mexico, has been charged with first-degree murder in her death after police say he admitted to confronting and chasing down Tibbetts.

Cotton, a staunch opponent of illegal immigration, said he was praying for the Tibbetts’ family and blamed decades of lax enforcement of immigration laws for the death of the young woman.

“Prayers for Tibbetts family & all who knew & loved Mollie,” Cotton wrote online. “Lots of questions—where did this illegal alien work? what was his work status—but one thing is sure: Mollie would be alive if our government had taken immigration enforcement seriously years ago.”

The illegal alien, charged with first-degree murder, has been living in the U.S. for four to seven years.

“On Aug. 21, ICE lodged a detainer with the Poweshiek County Sheriff’s Office on Christian Bahena-Rivera, 24, an illegal alien from Mexico, after he was arrested on murder charges,” Immigration and Customs Enforcement (ICE) officials said in a statement to Breitbart News.

Prayers for Tibbetts family & all who knew & loved Mollie. Lots of questions—where did this illegal alien work? what was his work status—but one thing is sure: Mollie would be alive if our government had taken immigration enforcement seriously years ago. https://t.co/JScrv7aD5P