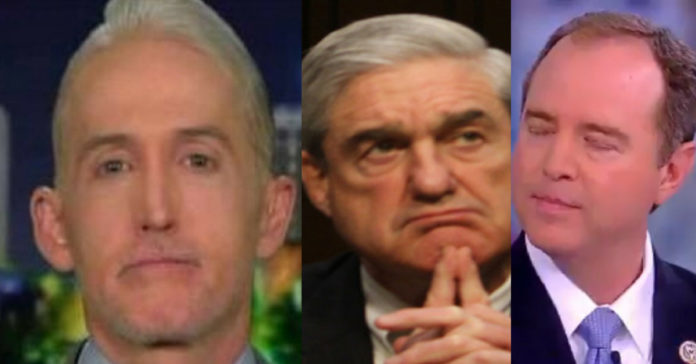 Trey Gowdy is one of the few people in Washington DC that has broad respect across the aisle.

In hyper-partisan DC today, that is a true accomplishment so it is always wise to listen to his words.

South Carolina Rep. Trey Gowdy said Sunday that, after 18 months of congressional investigation into possible collusion between the Trump campaign and Russian government, he has yet to see a “scintilla” of evidence showing that there was coordination between the two sides.

The Republican also said it is unlikely that any Democrat has seen evidence of collusion because if they had, California Rep. Adam Schiff would have already leaked it.

“I have not seen one scintilla of evidence that this president colluded, conspired, confederated with Russia, and neither has anyone else, or you may rest assured Adam Schiff would have leaked it,” Gowdy said during an interview on “Fox News Sunday.”

“That’s why they’ve moved off of collusion onto obstruction of justice, which is now their current preoccupation,” he added.

Gowdy, who is a member of the House Intelligence Committee and chairman of the Committee on House Oversight & Government Reform, said he has likely seen more government documents related to the collusion investigation than anyone in Congress.

Gowdy went on to say that Russia did interfere in our election and we need to get tough with them and that Trump needs to listen to his advisers on this subject, all of whom agree with the intel community.