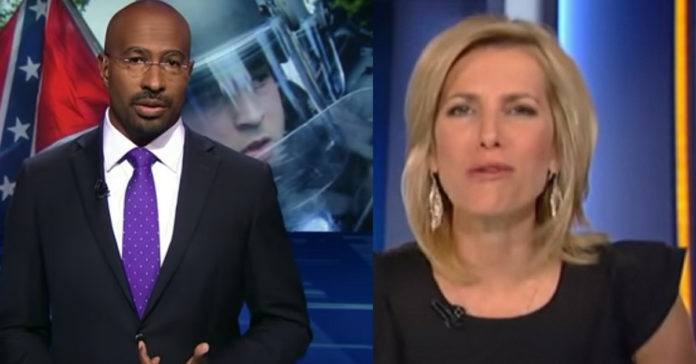 Laura Ingraham is under attack from the left for recent comments she made about immigration.

The left, as usual, falls back on their favorite canard that anyone who opposes them is a racist and a monster.

It is old and tired and rather than prove their point, proves the opposite.

That in fact, the left is intolerant of anyone who disagrees with them.

As reported by The Daily Caller: CNN host Van Jones compared Fox News host Laura Ingraham to a neo-Nazi on his show Saturday and said they were preaching the same message of hate.

“This guy actually openly wears swastikas on his shirt and he says America is his country because he’s white,” Jones said before running the clip. “To be fair, 12 of the guy’s neighbors came out immediately and told [the CNN correspondent] they don’t agree with this guy. He doesn’t represent them and their community and they deserve a round of applause for sticking up for what’s right in this country.”

Right after praising the man’s neighbors for doing the right thing, Jones attacked Ingraham and fed the fire of division by comparing her message to that of hateful Nazis.

“I appreciate them for doing that. But here’s the thing that bothers me the most. Those same themes that were once considered so extreme are now becoming mainstream, at least in conservative media,” he continued. “Listen to Laura Ingraham on Fox News addressing millions of your fellow citizens and neighbors on our air.”

“Now, I see zero difference between what Laura Ingraham is saying on mainstream cable and what the Nazi was just saying in front of his house,” Jones concluded. “Literally, it’s the same message and it is wrong. But there is some good news in America. There are millions of people who refuse to accept this notion that America should be whites only or dominated by one race forever.”

Feminist Writer’s Horrific Attack on Melania Trump BACKFIRES, WATCH Laura Ingraham Chew Her Up and Spit Her Out.